The Sewol - time to move on

The Sewol - time to move on 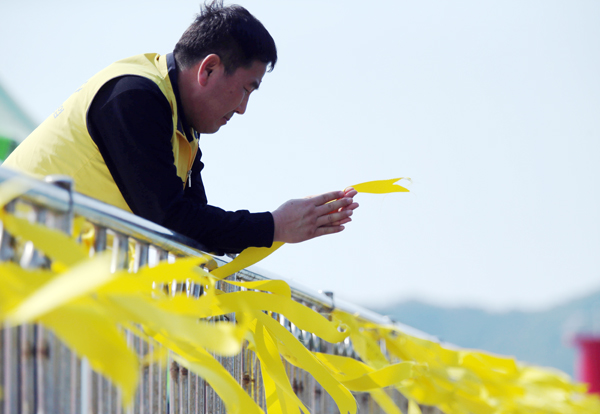 A father of a missing student on the Sewol ferry prays for his son’s comeback at Paengmok Harbor. [JoongAng Ilbo]

Park Geun-hye has done a praiseworthy job so far in her presidency. In foreign affairs, my area of special interest, I admire her efforts to set up a long-term framework and strategy for dealing with North Korea and her efforts to promote Korea’s economic interests in the world economy. Especially in North Korean affairs, she seems to have a solid majority of the Korean people behind her, although the left wing, still fighting the battles of the democratization period in Korea’s history, is still not convinced that the North does not have the interests of the entire Korean people at heart.

But in the domestic arena, the president (like her predecessors in the post-democratization presidency) faces a volatile mix of public opinion. Friends of mine in the diplomatic community here have sometimes commented on how quickly Korean sentiment can shift and coalesce. Our wired society is quick to get the word out, and we seem to have a gift for impassioned oratory and catch phrases that can swing the public debate in one direction or another. Blogs, chat rooms and social networking services are new ways to join the public discourse, and politicians ignore them at their peril.

I was reminded of the power of our wired society in the aftermath of the sinking of the Sewol passenger ship. The appalling loss of (mostly) young lives, the apparent incompetence demonstrated by the first responders to the ship’s calls for help and the bureaucratic turf fights that also hampered the rescue efforts forced us to confront the reality that our country is not as advanced as we sometimes like to believe.

But as time passed, I began to wonder if the saturation coverage that the media devoted to the tragedy was really in our best interest. In our modern society, we cannot afford to focus exclusively on one problem, no matter how heart-rending and important it is. As we mourned the dead, investigated the causes and began to work on correcting the deficiencies in our systems, we still needed to follow other important issues. About a week before the recent elections, for example, I realized with some dismay that I did not even know the names, much less anything about the platforms, of several of the candidates I would have to choose among on June 4. The election had been almost completely pushed aside as we focused on the aftermath of the Sewol sinking.

Another aspect of that massive coverage of this tragedy that bothers me is the publicity devoted to the details of the search for the owner of the ferry, Yoo Byung-eun. President Park recently commented with some exasperation that she could not understand why law enforcement agencies had still not been able to track him down.

I have a suggestion to offer. This search is being conducted in such a glare of publicity, and with such a torrent of leaks to the media about where the next effort will be made, that perhaps even I, at my advanced age and with a tendency to forget where I left my house keys, could evade the authorities. I would only have to remember to watch the morning TV news and read a newspaper or two to make sure I went somewhere that day where the police were not going to be.

In short, I believe that Koreans have to move on. We should never forget the tragedy, but we cannot allow ourselves to be consumed by it, and we were probably consumed by it for too long at the expense of other priorities that demand citizens’ attention. We cannot restore the lives of the victims, and I think the best memorial to them is to ensure that such an incident never happens again. That means punishing the guilty, but far more important, it means tightening our safety regulations and the enforcement of those regulations.

Long-term, persistent efforts are something that a bureaucracy does well if it is given the right orders and oversight. Our public servants are not, as a whole, the “Gwanfia” (bureaucratic mafia) that the current slang term implies. The wheels of justice (and of bureaucratic work like safety compliance inspections) turn slowly, but they grind exceedingly fine. The media, the public’s watchdog, should continue to watch the reform efforts and criminal proceedings, but that watchdog should bark only when there is an important development worth barking about.

And this memorial to the Sewol victims should not be limited to maritime safety alone. Every emergency exit that is locked, every staircase that is impassable because it is filled with stored goods, every hospital emergency generator that is not regularly tested, every food processing plant where sanitary precautions are lacking - all these, when problems are found and corrected, will become a part of the memorial.

Two months after the tragedy, we can see the overwhelming coverage by the media beginning to taper off, although the manhunt still draws a huge amount of attention (and presidential ire). I hope that we Koreans have not become exhausted by the overwhelming publicity given to the Sewol since its sinking. As law enforcement officials and the courts continue their work to find and punish the guilty, the Blue House and ministers should be giving equal attention to making sure that our ships, bridges, buildings, roads, aircraft and other parts of our high-tech society are under the watchful eyes of our safety professionals.