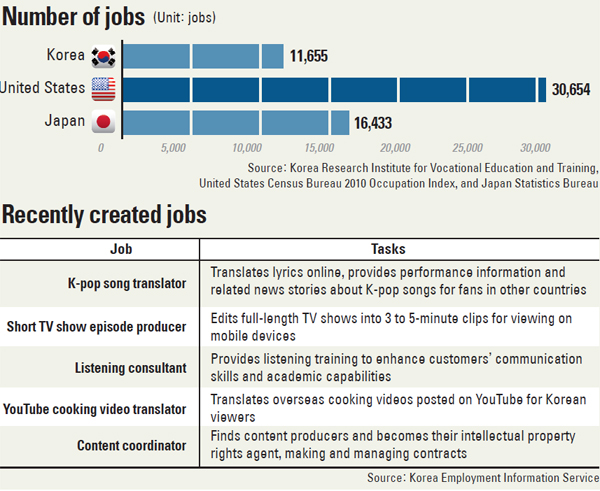 We have reached a new era of employment in which an increasing number of people are creating their own jobs.

These new jobs are usually a creative twist on an existing job but can also be an entirely new position, different from starting up a small shop or restaurant. Unique jobs have been invented, such as an idea dealer, a talent librarian or pet photographer.

Employment openings are difficult to secure often because of mismatches between job seekers and recruiters, and the self-employment market is oversaturated.

Difficulties in the local job market have led pioneering job seekers to decide that, in reality, their options for employment are limitless.

To create a new job, a person must have passion, a good idea and the willingness to take on a challenge. Huge capital and expensive facilities are not essential.

Ahn Hee-wook, 30, who was famous in street basketball in the early 2000s, opened a company called Skill Trainer in February, which teaches unique drills to local basketball players to improve their technique.

Ahn records and analyzes the moves of each player, and makes suggestions on their play by comparing them with U.S. NBA players. In just three months after starting the company, he had 15 customers, including two professional Korean players and 13 players in college, high school and middle school leagues. He is planning to hire additional trainers to help with the workload.

“Since Korean basketball mostly emphasizes the team’s cooperative skills among players, it was hard to find young players with their own unique strengths,” Ahn said. “Even while I was employed as an office worker, I always wanted to do something with basketball. Now I’m happily pursuing my dream after creating my own job.”

Making new positions is becoming a popular alternative to the employment standard because it establishes and expands niche markets.

The Korea Employment Information Service estimated that if 11 new occupations that currently don’t exist in Korea were introduced this year, about 200,000 new jobs would be created by 2017.

Since the employment rate among Koreans age 25 to 34 was only 70.9 percent in 2012, lower than the Organization for Economic Cooperation and Development’s average of 73.5 percent, introducing new types of jobs could raise the nation’s low employment.

Experts have said that new jobs could bring the Korean economy into the knowledge-based industry and away from the current manufacture-oriented industry.

“Because new positions largely focus on the creation process itself, it will bring beneficial ideas to society, even if the business fails,” said Park Cheol-kyu, president of the Small and Medium Business Corporation. “There is a need to form a new entrepreneurship culture and policy foundations for young people to keep creating their own job positions.”

Experts have also suggested that Korea introduces jobs that exist overseas but not here.

One example is a dog walker. Professional dog walkers are common in Western cultures, exercising and feeding dogs for their busy owners. Some tech-savvy dog walkers send the pet’s exercise route to the owner via smartphone GPS systems.

“There are more than 100,000 occupations worldwide, of which about 10,000 exist in Korea, and adults here actually recommend only 30 kinds of jobs to students,” said Kim Jin-soo, president of the Korea Entrepreneurship and Management Research Institute and a professor at Chung-Ang University. “Young job seekers should have a wider access to a variety of job choices.”

The United States and Japan had more available occupations because they categorized jobs in greater detail, depending on location, the facilities being used and the outcome of the job.

While Korea has only one job called “apparel mender,” each task a mender completes becomes a separate job in Japan, such as an apparel size coordinator, men’s trousers mender or women’s wear mender.

“The two countries experienced a professionalization and subdivision of occupations as their society developed, which means Korea will experience the same as the economy develops,” said Kim Joong-jin, head of KEIS’ Occupational Research Center.

“The creation of new occupations is a sign of an advanced nation because it allows people to rapidly respond to the market’s fluctuation and enables them to start a business with small capital,” said Park of the Small and Medium Business Corporation.

However, experts advise that people should take a cautious approach when coming up with a new job idea.

“If you decided to create your own job, you should be ready to become committed to it at least for the first few years,” said Ko Young-ha, chairman of the Korea Business Angels Association.

The Presidential Committee on the Young Generation said that an ideal new job should be original, profitable, realistic and useful. The position should have little competition, potential market demand, have few policy restrictions, and should not be highly technical.