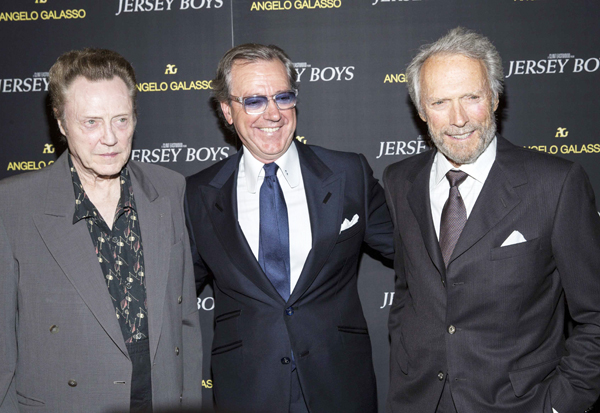 NEW YORK - Director Clint Eastwood saw three versions of the Tony Award-winning musical before casting the film adaptation of “Jersey Boys,” which charts the rise of 1960s pop-vocal group The Four Seasons from the mean streets of New Jersey to the top of the charts.

Eastwood, 84, knew that finding the right actors was the key to transforming the hit juke-box musical, among the longest running shows on Broadway, into the film that opens in U.S. theaters on Friday.

“Casting for me is one of the most important things next to the writing,” Eastwood, a double Oscar-winner for “Unforgiven” and “Million Dollar Baby,” told a news conference.

“If you cast it properly it takes place very easily, but if you cast it improperly you are fighting an uphill battle.”

Instead of opting for Hollywood names, Eastwood went back to the stage to find his stars.

Boardwalk Empire’s Vincent Piazza, who plays hot-headed manager and lead guitarist Tommy DeVito, knows the only way out of the neighborhood is to join the Army, the mob or get famous. Piazza is the only member of the group who was not in a stage production.

Eastwood admired the musical and just tried to “open it up, give it a certain realism,” in the film.

In an unusual twist, the actors speak directly to the camera, giving the audience personal insights.

“It is my favorite thing about the film. It is so unexpected and it can be a little bit disconcerting at first,” said Bergen, who in one scene is shown watching Eastwood in the 1960s TV show “Rawhide.”

“But what I think it does is keep the audience completely engaged,” he added. “It keeps the audience feeling like we are watching them. It in a way it recreates the theatrical experience in the film.”

Eastwood, a jazz buff who directed “Bird,” a biographical film about saxophonist Charlie Parker, and produced a documentary about pianist Dave Brubeck, had met Valli many years ago and was a fan of The Four Seasons.

“I love doing films that have music and musicians, and in this case, singers,” said Eastwood. “I think ‘Can’t Take My Eyes Off You’ is one of the real classic songs of that era and would have been a classic song in the ’40s, ’50s or ’30s, or any time.”