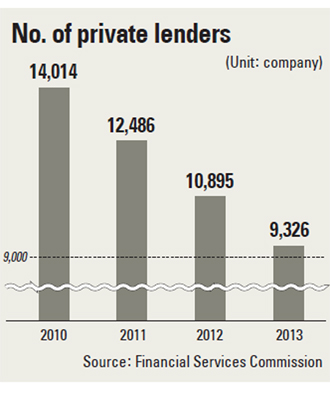 Due to falling profitability in the low interest rate environment, the number of small private lenders has fallen drastically and as a result the industry is shifting to focus on better quality from large lenders.

The latest survey of the industry by the Financial Services Commission (FSC) released yesterday showed that the number of private lenders operating declined to 9,326 as of late 2013, down 16.8 percent from a year earlier.

The number of large private lending corporations with more than 10 billion won ($9.81 million) in assets increased slightly from 129 in 2012 to 144 as of last year, but the number of smaller lenders dropped to 7,620 from 9,188 during the same period.

The number of consumers who took out a private loan also decreased from 2.52 million in 2011 to 2.48 million last year.

The survey found that 62.2 percent of those who took out private loans were people on an ordinary salary, 23.6 percent were self-employed business people and 6.3 percent were students or homemakers.

The survey showed the highest number of big private lenders since the FSC began monitoring the industry.

The new large lending businesses pushed up the total amount of outstanding loans to 10.02 trillion won, up 12.9 percent from a year earlier.

The average loan taken out per person also climbed from 3.47 million won to 4.03 million won.

The survey showed the average loan interest rate stood at 31.9 percent on a yearly basis as of late last year, down 0.4 percentage point from June 2013.

Since the authority cut the highest legal interest rate for private loans from 44 percent in 2010 to 39 percent in 2011, rates have been declining across the industry.

As the financial authority intensified its crackdown on loan intermediary businesses, the number of registered intermediary lenders declined to 2,324, down 15.6 percent compared to six months ago.

In June last year, the authority put a cap on commission fees, which are the major revenue source for intermediary businesses. The maximum commission fee was set at 5 percent of the loan’s value.

Explosive growth in the number of private lenders after the global financial crisis contributed to the nation’s skyrocketing household debt.

The figure includes borrowing from non-banking financial companies as well as purchases made with credit cards.