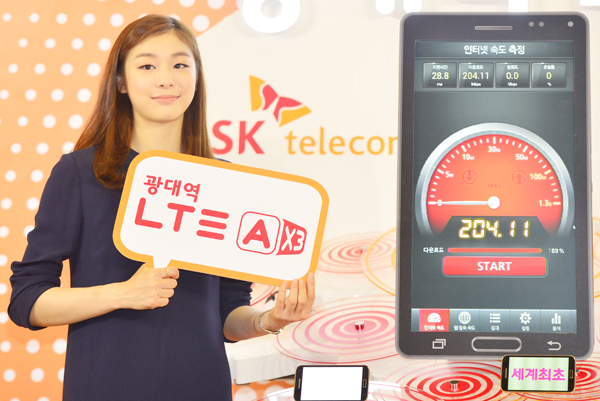 Samsung Electronics yesterday rolled out the world’s first smartphone that uses broadband LTE-A wireless connections, tripling the speed of the phones over the current generation of LTE smartphones.

The Galaxy S5 Broadband LTE-A boasts a data transfer speed of up to 225 megabits per second (Mbps), capable of downloading a 10-megabyte music video in 0.4 seconds, Samsung said.

The current maximum speed for LTE services is 75 Mbps, while LTE-A’s (Advanced) service is 150 Mbps.

The commercial launch of the broadband LTE-A service comes a year after Samsung and SK Telecom started offering the service of the Galaxy S4 LTE-A, making Korea the world’s first country to commercialize the LTE-A service.

The other two carriers, KT and LG U+, are planning to sell it as early as next week.

“We will continue to lead the global market by introducing a variety of products to meet the needs of consumers.”

Samsung said there are other appealing features of the phone beyond its speed.

One eye-catching feature is the quad HD display. The display has a 2560×1440 resolution, which is 1.8 times better than the full HD display featured on the Galaxy S5.

Standard features on the Galaxy S5, including heart rate sensor, fingerprint scanner and a water and dustproof case, are also featured on the Galaxy S5 Broadband LTE-A. It runs on the Android 4.4 Kit Kat operating system and has a 16-megapixel rear camera and a 2,800mAh battery.

Like the Galaxy S5, the Galaxy S5 Broadband LTE-A comes in four colors: cooper gold, charcoal black, shimmery white and electric blue, but sweet pink was added for the rear cover of the new phone. The phone sold through SK Telecom has one more color option: glam red.

Purchasers of the Galaxy S5 Broadband LTE-A will get a premium global app package. They can also download up to 10 movies a month until the end of September.

There is no confirmed plan yet for global sales of the Galaxy S5 Broadband LTE-A, Samsung said. According to industry observers, few other countries have constructed wireless services advanced enough to handle broadband LTE-A services or phones.

“The world’s first commercialization of 225 Mbps LTE-Advanced by SK Telecom will pave the way for Korea to open up an era of 5G in the future,” said Lee Jong-bong, executive vice president and head of SKT’s network division, during a press conference at SK T Tower, its headquarters in Jung District, central Seoul, yesterday.

“In the case of LTE services, the average download speed was 30 to 40 Mbps and that of the broadband LTE and LTE-A was 50-60 Mbps on average,” said Lee. “Customers will be able to experience an average of 70-80 Mbps speed for broadband LTE-A.”

“Although there are concerns that speeds might decline as the number of subscribers increase, we are preparing for additional frequencies for next year and launching new technologies every year,” said Lee.