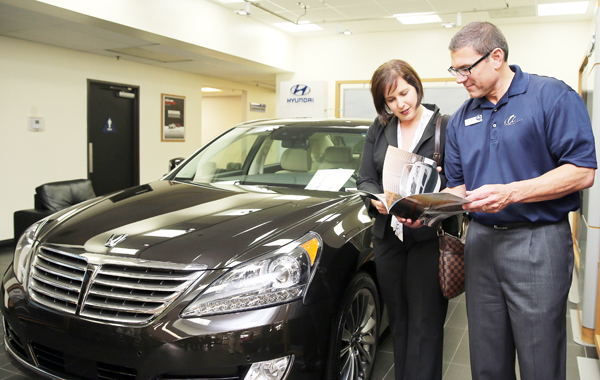 A customer checks out an Equus sedan at a Hyundai Motor dealer in Tustin, California. Provided by the company

Hyundai Motor, Korea’s largest automaker, took the top ranking in J.D. Power’s 2014 Initial Quality Study (IQS) of all mass-market brands, reclaiming the honor that it won in 2006 and 2009.

The U.S.-based market researcher surveyed more than 86,000 owners of 2014 model vehicles that they purchased between November and February, and asked questions in 233 categories to examine problems that consumers experienced during the first 90 days of ownership.

The ranking is determined by the number of problems experienced per 100 vehicles. A lower score reflects higher quality.

According to J.D. Power, Hyundai received 94 points to take the top spot out of 20 mainstream brands. Its score, which is the company’s highest yet in the IQS, was 11 points better than runner-up Toyota. Hyundai was the No. 5 brand in last year’s study, with 106 points.

Hyundai’s sister company Kia Motors was ranked third behind Hyundai and Toyota, with 106 points. Kia was No. 5 in last year’s study for mass-market brands.

In total nameplate rankings, which include 12 luxury brands along with mass-market brands, Hyundai ranked fourth, six places higher than last year’s study. Porsche was the top brand for the second year with 74 points, followed by Jaguar (87 points) and Lexus (92 points).

Kia ranked as the sixth brand overall, which was the first time that Korea’s second-largest automaker made it into the top 10.

The average for this year’s IQS was 116 points, up three from last year. Italian mini-car brand Fiat was the worst performer, with 206 points.

“This is a result that Hyundai and Kia have worked toward by enhancing quality over four years and checking the trend of markets,” said a Hyundai Motor Group spokesman. “Hyundai and Kia created the ‘Q-Cluster’ to check the quality of products with suppliers, and it started to show results last year.”

Furthermore, five Hyundai and Kia models claimed the top award in their category, which is the second-largest behind General Motors, which had six winning models. Hyundai and Kia’s previous record last year was three awards.

Hyundai’s Genesis was the best midsize premium car for the second straight year with 72 points. The Lincoln MKS was second in the category, while the BMW 6 Series, Lexus GS and Mercedes-Benz CLS-Class tied for third.

The Hyundai Accent was the best small car with 65 points, beating the Mazda 2 and Kia Rio. Its score is the second highest out of 207 cars ranked by J.D. Power, after Porsche’s Panamera.

The Hyundai Avante, known as the Elantra overseas, was selected as the top compact car ahead of the Toyota Corolla and Honda Civic.

Kia’s Sportage R tied for the top spot in the small SUV category with the Buick Encore and Nissan Juke. The K7, known as Cadenza overseas, was the best large car in its debut year in the U.S. market, finishing ahead of the Nissan Maxima and Toyota Avalon.

Hyundai’s volume models like the Sonata midsize sedan and Santa Fe midsize SUV finished second in their categories, while the Equus was ranked third in the large premium car group.

Hyundai and Kia hope the result will boost their brand image and U.S. sales.

Both automakers set a new monthly record for vehicle sales in May. Hyundai sold 70,907 vehicles last month, beating its previous record of 69,728 units in March 2012. Kia sold 60,087 units in May, which is the first time that the company sold more than 60,000 cars since opening its American branch in 1992.