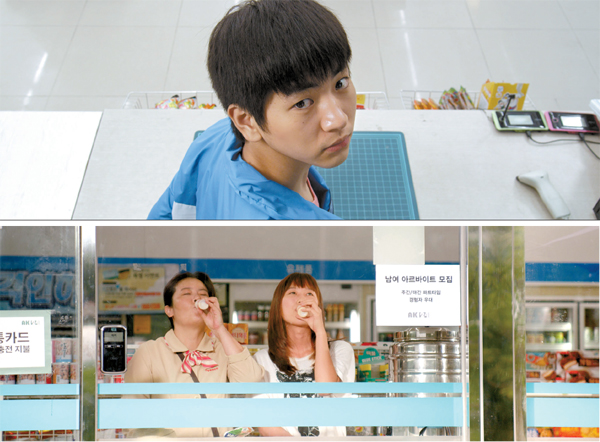 Against the backdrop of a franchise convenience store, Kim Kyung-mook’s “Futureless Things” examines everything from gay rights to defector assimilation to the volatile nature of the job market. Provided by KT&G Sangsang Madang

Convenience stores are fascinating places. Numerous theories have been conjured and textbooks written to dissect the spaces that encapsulate the essence of 21st-century consumption.

For every 2,075 people in Korea, there is a convenience store. And although the shops arrived on the scene a lot later than in many other countries, their density has overtaken the United States (one for every 2,100) and Japan (2,719). One needs to just walk a block in Seoul to see how integral the 24/7 stores are here.

But while the retail outlets have been examined from a commercial aspect, never before in Korea have they been given the creative spin that Kim Kyung-mook has given them in his upcoming film “Futureless Things.”

“How do they go to the bathroom?” and “What do they do when no one is around?” Most patrons, whether they popped in to grab a snack or charge their phones, have probably asked these themselves these questions - curiosities that will be satiated in “Futureless Things.”

Kim’s idea is ingenious: a day in the life of a convenience store with a magnifying glass on the people who work there. In the hierarchical society of South Korea, casual retail workers, or arbeit - a borrowed word from German that means “work” - are mostly students or younger folks.

In the movie, they pose an interesting question. What is their “job” in society or life? Tapping into the negative connotations that come with being an arbeit, Kim examines the dreams of the young people that pass through the rigid workplace where freedom is not allowed.

The workers’ relationship with their boss, and even with one another, is tried and tested as they encounter an odd range of customers and situations in the confined space.

Zooming in and out of societal maladies, the film also examines the franchise-franchisee relationship in depth and makes some strong assertions on the nature of this alliance, and more broadly, capitalism.

The day starts off with one staff member training a new worker. Although they are strangers, there is an instant connection as they bond over stock count, fiddling with the cash register and a difficult customer.

Before long, viewers are introduced to a medley of disadvantaged youth, from defector Soo-hee (Kim Hee-yeon) and wannabe actor Hyun-soo (Shin Jae-ha) to Gi-sun (Lee Ba-ul), who studies for the Toeic, an English-language proficiency test, every chance he gets. Sexism, bullying and gay rights, as well as the perpetual concern of youth unemployment, are tackled in a hilarious, engaging way.

Similar to last year’s hit “The Terror Live,” everything mostly happens in the store. And while the scenery may get old, at times the story is difficult to follow as there’s just too much going on.

With so many social issues compared, at times it’s easy to forget what is being examined in the first place or if the issue was highlighted in an adequate manner. The treatment of a gay romance was probably the most underdeveloped theme while the power of money takes center stage.

The constantly shifting genre is also distracting as the movie goes from rom-com to pure comedy to almost sci-fi and then to drama before ending in black-comedy fashion.

It’s hard to decipher whether “Futureless Things” is a bold attempt at social commentary or if it’s just too didactic.

Kim has been awarded prizes at various indie film festivals around the world, and while his lack of years in the field is evident at times, especially with the over-dramatized ending, his work will no doubt get people talking.