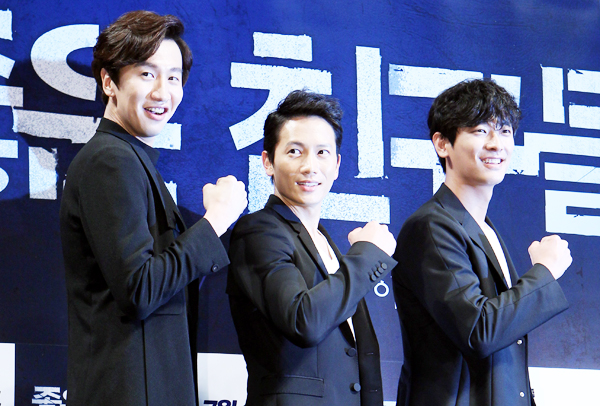 Film noir hasn’t been considered a mainstream genre in the Korean box office for many years. Its cynical approach to the world and the cold-hearted betrayals it depicts were perhaps too serious for the general public.

However, the genre is seeing a resurgence at local cinemas with a series of noir films opening and enjoying considerable success.

The next to carry the baton is rookie director Lee Do-yun’s new movie “Confession,” a film about the brutal fate of a trio’s friendship after one man’s mother is killed in what appears to be an accident.

During the press junket that took place June 12 at Apgujeong CGV, southern Seoul, the film’s male leads - Ji Sung, Joo Ji-hoon and Lee Kwang-soo - and its director talked about what it was like to film a “man’s movie.”

“When I first received the script, I thought to myself that my character would be a little boring,” said Ji, the eldest of the three.

“But when I read it one more time, scenes that seemed bland before were rather the most interesting parts.”

Ji went on to explain that his role, Tae-geun, whose emotions fluctuate frequently but who keeps those ups and downs to himself, made it harder for him to accurately convey Tae-geun’s character to the viewers.

“There were a number of action scenes where I needed to run again and again,” said Ji.

“It was physically burdensome, of course, but what was really challenging was that I needed to convey Tae-geun’s mind through those actions.”

Lee, who is most widely known for the gauche character he plays on reality television programs, said he put a lot of thought into overturning that image.

Lee added that he became absorbed in the role of Min-soo, who believes his friends are everything in the world.

When asked how he wants his performance to be judged by the audience after they watch the film, Lee answered, “I personally liked the character Min-soo, but at the same time he was a very hard one to play. When the viewers see the movie, I just want them to get that ‘hard and complex mind-set,’ of Min-soo, just like I did.”