Chinese first lady to join husband on trip to Seoul

Chinese first lady to join husband on trip to Seoul 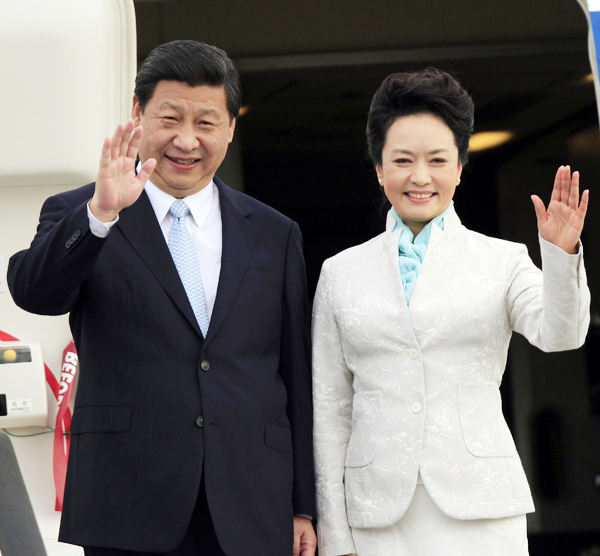 Chinese President Xi Jinping will be accompanied by his wife Peng Liyuan in early July when he comes to Seoul to hold a summit with President Park Geun-hye, according to multiple sources with the Korean government.

It will be the first time the Chinese first lady has officially visited Korea. “We are preparing for the summit under the scenario that Ms. Peng will come to Seoul with Mr. Xi, after her company was recently nearly confirmed,” said one of the sources.

Although the Blue House has yet to make public the details for the Chinese president’s trip here, some of its officials and media reports say Xi’s itinerary will run from July 3 to July 4.

Sources say the Korean government has been eagerly awaiting the arrival of the first lady, who is renowned for her beauty, style and active cultural diplomacy, but refrained from officially requesting it given her tight schedule. The couple’s offer to travel together is unexpected, though welcomed by Korea.

China’s versatile first lady, who formerly served in the People’s Liberation Army and later rose to fame as a folk singer, accompanied Xi on his first overseas trip to Russia and Africa in March 2013, when he took office. Peng also accompanied her husband to the United States and Europe this year.

When President Park visited Beijing as a state guest in June last year, the couple welcomed the Korean president for lunch. Peng’s presence at the meal was unexpected. Her surprise appearance, according to Chinese media outlets, is indicative of the fact that Xi wanted to treat President Park as family.

This time when Xi comes to Seoul, President Park will arrange either a luncheon or a banquet for the couple, though no particular event is planned specifically for Peng, according to government officials.

With just two weeks left before Xi’s visit here, the Korean and Chinese governments have been in discussion over a pair of pandas, which China intends to present to Korea as a gift. Because the giant panda is endangered, the Chinese government has made it a rule since 1984 to lend the animals overseas under a contracted designated period.

Bringing the animal, which is beloved by the Chinese and a national symbol, to Korea was previously discussed when Park visited China last year. However, the plan was scrapped due to hefty costs. Maintaining two pandas costs between 1 billion won ($98.1 million) and 1.5 billion won annually.

Leasing a couple of pandas for a decade would mean that the Korean government would have to spend 15 billion won.

Everland, Korea’s biggest outdoor theme park operated by Samsung, borrowed two pandas in 1994 to celebrate the second year of Korea-China diplomatic ties, but had to return them in 1998 in the aftermath of the Asian financial crisis.

Should the Chinese government confirm the gift, Everland is most likely to take on responsibility for caring for the bears.