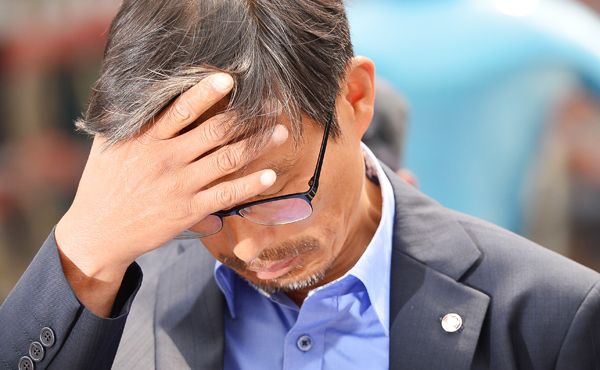 Kim Jung-hoon, president of the Korean Teachers and Education Workers’ Union, walks out of the Seoul Administrative Court in Yangjae-dong, southern Seoul, after the court ruled against the union. [NEWS1]

A Seoul court ruled yesterday that the country’s second-largest teachers’ union cannot maintain its legal status, rejecting its claim that the government’s decision to outlaw it violated basic labor rights for teachers in the group.

The ruling yesterday by the Seoul Administrative Court, which handles challenges to government administration, effectively stripped the Korean Teachers and Education Workers’ Union of its legal status and will allow the government to take further action, including stripping it of its collective bargaining rights and requiring teachers working full time at the union to return to their schools.

Last October, the government banned the union because it refused to expel nine union members who were dismissed from their schools.

“A clause of the labor union law on teachers’ unions that bans the membership of nonworkers in a union does not infringe upon a right to organize,” said presiding Judge Ban while delivering the verdict. The judge also said teachers should be held more strictly to relevant labor regulations than other workers because of their special status and responsibility in society.

“It is important for an educator to be held to high ethical, professional and public service standards as they are responsible for cultivating students’ characters,” said the judge.

With the court’s ruling yesterday, the group, which was founded in 1989 as an underground union and recognized by the Kim Dae-jung government in 1999 as a lawful group, lost the legal status it enjoyed for 15 years. As a result, the Ministry of Education will not recognize its bargaining rights and stop subsidies to the union. People who are full-time workers for the union will have to return to their teaching jobs by July 3. Union members will also be forbidden from paying monthly dues starting in July.

The decision yesterday drew immediate protests from the group, which called it “a Park Geun-hye government-orchestrated persecution.”

“A court today not only stripped the KTU of its legal status, but it also took away labor rights of workers who were wrongfully dismissed by employers,” said Kim Jung-hoon, the president of the union, who was on the 11th day of a hunger strike.

The liberal association said it will appeal to the Supreme Court and file an injunction to stop the ministry’s measures against it.

A legal showdown between the KTU and the Ministry of Employment and Labor began last year when the union filed a lawsuit in October against the ministry’s decision to outlaw the organization because it refused to expel nine union members who were dismissed from schools. The government demanded the union revise a clause in its Constitution that allows it to maintain members dismissed by education authorities.

The union rejected the demand, saying it had always accepted union members who were dismissed from schools through its 25-year history.

Lawyer Shin In-soo, who represented the KTU in the case, said after the ruling that there are many labor unions that accept members who have been dismissed from jobs and the government was only cracking down on the KTU.

“The government is only going after the KTU because of President Park Geun-hye’s personal opposition to the group,” said the lawyer.

Since its founding in 1989, the KTU has frequently created controversies on issues, including its campaign for a ban on corporal punishment in schools. While being praised by supporters for bringing more transparency to the management of schools and calling for improvement in basic student rights, critics blame the union for trying to drag its political beliefs into the classroom.

Though the court denied the KTU’s legal status yesterday, it remains to be seen how tough the Education Ministry can be against it considering

Of the 17 positions contested, liberal candidates won 13 seats. Eight of those victors were former KTU members.

In a display of their support for the union, the 13 incoming superintendents sent a joint petition Monday to the court calling for the withdrawal of the Ministry of Employment and Labor’s designation of the union as an illegal entity.

The liberal education chiefs are expected to take collective action to block any upcoming government orders against the KTU that follow yesterday’s ruling.