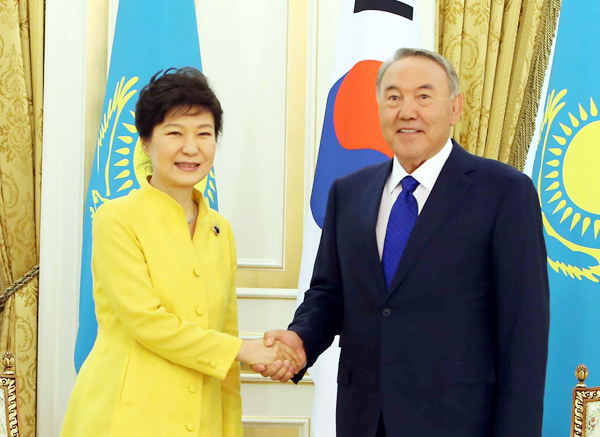 President Park Geun-hye and Kazakhstan’s President Nursultan Nazarbayev agreed in a summit in the nation’s capital of Astana yesterday to continue to expand joint energy and natural resources projects.

The two national leaders adopted a joint statement concerning the cooperation following the summit, in the second stop on Park’s six-day tour around Central Asia, according to the Blue House. She and President Nazarbayev held their first meeting in September in St. Petersburg, Russia.

Under the accord, the two countries will actively proceed with three planned joint projects that amount to a combined $10 billion - the construction of a coal thermal power plant in Balkhash, a petrochemical complex in Atyrau and the development of the mine lot in Zhambyl.

President Park also asked for the Kazakh government’s support for Korean companies vying to participate in a $3.5 billion project to expand oil fields in Tengiz reservoir, one of the largest discoveries in recent history.

“I realized during the summit last time that the potential for the cooperative relationship between the two countries is huge,” she said. “I am glad to be visiting here after you invited me to Kazakhstan at the time.”

Her counterpart noted that he was interested in forging more developed political, economic and social relations with Korea. President Park, in return, expressed hope that Kazakhstan successfully achieves its 2050 Strategy and vowed to cooperate.

Nazarbayev came up with the policy during his annual state of the nation address in December 2012, calling for widespread reforms to put Kazakhstan among the top 30 global economies by 2050.

The two leaders also signed five memoranda of understanding after the summit, which includes allowing ordinary passport holders to visit each country without a visa for up to 30 days and would make it possible for Korean enterprises to take part in a railroad modernization project in Kazakhstan.

Later in the day, President Park and her delegation attended a business forum with business leaders from Kazakhstan, and also visited an art exhibition. She is slated to leave for Turkmenistan today, the last destination on her three-nation trip.