Board chooses law professor as president of SNU

Board chooses law professor as president of SNU 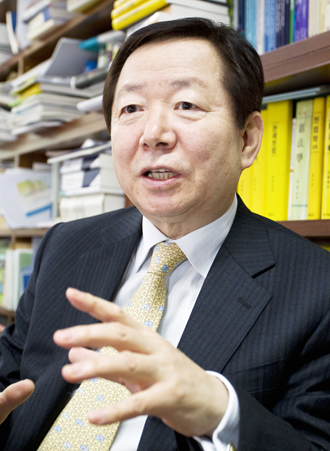 Seoul National University chose a law professor as its new president yesterday, the first of its presidents to be elected by its board.

The new president-designate of the nation’s state-run elite university will become the first chosen since SNU was incorporated and allowed to make profits in 2011, and also the first elected by the board. Since 1991, SNU presidents were chosen by the faculty.

Born in Changnyeong County, South Gyeongsang, Sung is a renowned scholar in constitutional studies and is often listed as a candidate for high-ranking government posts.

He graduated from two elite schools that produced many political bigwigs: Kyunggi High School and Seoul National University. After getting bachelor’s and master’s degrees at SNU Law School, he obtained a a doctorate degree in law at Pantheon-Assas University in Paris.

Outside academia, Sung is the former head of the National Assembly’s Government Public Ethnic Committee and former adviser to the Constitutional Court.

“I will put my emphasis on nurturing talented students who can realize the dignity of humans and humanity,” Sung said in a written statement sent to reporters after the voting yesterday.

“There are several difficult issues going on, but I will resolve them harmoniously,” the statement read. “I will seek cooperation from various sectors in society so that SNU could develop as a public, incorporated university.”

Concerns have risen among both faculty and students after the university was incorporated in 2011, after which it received reduced government subsidies and more autonomy in management. Tuitions had to be raised and many members of the faculty protested the incorporation plan because they lost their status and benefits as civil servants.

The 13 education superintendents who won in the June 4 local elections have said that SNU should be abolished because it has boosted elitism in the country.

“I know about public discontent over SNU these days,” Sung said. “The Seoul graduates will be able to be loved by society when they realize their duty of nobles oblige.”

While running for the position, Sung pledged to stabilize the incorporation system of the university and consider ways to restore lost benefits to the faculty. He also vowed to boost some basic studies and share his authority with the vice president and other deans of the university.

SNU previously launched a committee to recommend the presidential nominees consisting of 20 faculty members and 10 outside figures, and an advisory body for the recommendations of 244 faculty who were chosen by a lottery.