Parsing the benefits of DTI and LTV changes

Parsing the benefits of DTI and LTV changes 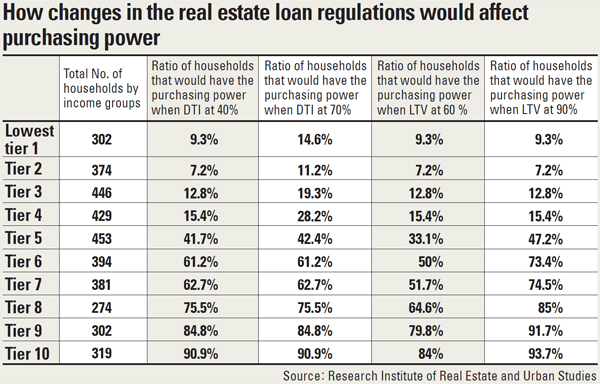 The real estate market was surprised recently when Choi Kyung-hwan, the finance minister and deputy prime minister of economics nominee, mentioned the possibility of easing the country’s two most significant mortgage regulations: the debt-to-income (DTI) and loan-to-value (LTV) ratios.

On Thursday, another ranking government official, Land Minister Suh Seoung-hwan, said the government will look into the issue. This was a turnaround from Suh’s stance since taking office in March 2013 that DTI and LTV regulations are designed to protect the soundness of the financial industry and not a tool of the housing policy.

It suggested that policy makers will have to approach the issue in the context of the group it wants to prioritize and which would have more of an impact on the overall economy.

The study was based on 3,674 households in the greater Seoul area in which none of the members owned a property in his or her name. The group was split into 10 tiers based on income. The first tier was the lowest-income group, with the 10th being the group with the highest income.

The debt-to-income ratio compares the total amount of recurring debt - mortgages, credit cards, car loan and others - to incomes. The most important factor for obtaining a mortgage, then, is the level of debt.

When the DTI ratio goes from 40 percent to 70 percent, the ability to purchase a home improves for the bottom five tiers.

The percentage of qualifiers for the second-lowest group would increase from 7.2 percent to 11.2 percent. The ratio for the fifth tier would go from 41.7 percent to 42.4 percent.

However, upper-income groups would be virtually unaffected by the change since they can qualify for larger mortgages because they have higher incomes.

The situation is reversed for the LTV, which bases eligibility for a mortgage on the value of the property rather than the debt of the buyer.

For tiers one through four, there is no change in the ability to purchase apartments. This is because even if the LTV ratio goes up, the lower-income tiers already are limited by the 40 percent DTI ratio, unlike the upper tiers with their large incomes.

The regulations were adopted in the early and mid-2000s when the nation’s real estate market was heating up. The first regulation implemented to slow the property market was the LTV ratio in September 2002. The DTI was added in 2005 to further put the brakes on the market.

But questions on whether the regulations should remain unchanged were raised after the local real estate market was hit hard by the global economic crisis.

Since 2009, property-related loan regulations have remained a political hot potato.

The Lee Myung-bak administration made several attempts to change the loan regulations without much success.

At the time, reviving the market was particularly important as its contraction significantly affected the entire domestic economy. And many of the homeowners who purchased their properties with mortgage loans when the market was at its peak in the mid-2000s were becoming “house poor.” These are people with property whose values dropped so sharply that they were financially strapped and burdened by high mortgage payments.

Some were even forced to auction off their property, which at times sold at prices that were insufficient to cover the mortgage balance.

The biggest shackle that prevented the government from pursuing a lighter loan regulation was ballooning household debt, which as of the first quarter this year stood at a record of 1,024.8 trillion won ($1.003 trillion).