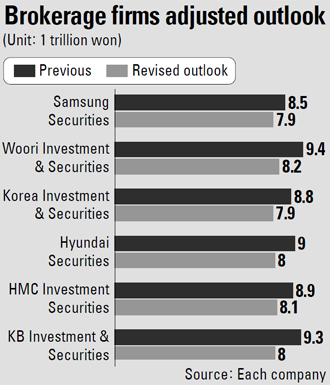 “Will there be another earnings shock?” Samsung Electronics investors are asking after the company’s shares continued on a losing streak.

The main cause of the drop was a series of the low operating profits forecast by local securities firms. There are growing concerns that the earnings shock that brought Samsung Electronics’ shares down from 1.4 million won each to 1.2 million won earlier this year could recur.

Samsung Securities readjusted its forecast for Samsung Electronics’ second-quarter operating profits to 7.9 trillion won, just a month after it lowered the estimate from 9.4 trillion won to 8.5 trillion won.

If the forecast is correct, Samsung’s quarterly operating profit will not reach 8 trillion won for the first time since the second half of 2012.

And Samsung Securities was not the only securities firm that decreased its projections for the company. Other securities businesses have also recently dropped their initial operating profit expectations for Samsung Electronics’ second quarter.

Korea Investment and Securities and Mirae Asset Securities even predicted that the company’s operating profit would be as low as 7.9 trillion won and 7.93 trillion won.

As with the earnings shock earlier this year, Samsung Electronics’ mobile phone business is the main problem.

Sales of the Galaxy S5, which was launched in April, are doing well, with more than 18 million units expected to be sold around the world.

But Samsung’s overall smartphone shipments dropped due to its low-cost products seeing a sales slump.

“As the lineup of low-cost products changed in the second quarter, the overall sales of smartphones decreased,” said Park Young-joo, a research fellow at Hyundai Securities.

As concerns over its operating profits emerged, Samsung’s shares, which began to head upward after its corporate governance restructuring June 3, started falling day after day.

The shares, which had continued to rise since May 12, the first trading day after Chairman Lee Kun-hee was hospitalized, are falling after peaking early this month.

But some analysts in the securities industry say that the current situation differs from the earnings shock of earlier this year.

“As competition intensifies, Samsung is losing effect in differentiation, but it does not mean Samsung is losing competitiveness or that its strategy is changing to volume-driven,” said Hwang. “Since the third quarter, we forecast that operating profit will exceed 8 trillion won again.”

“When compared to global competitors, Samsung’s shares are still undervalued,” said Suh Won-seok, an analyst at Korea Investment and Securities.