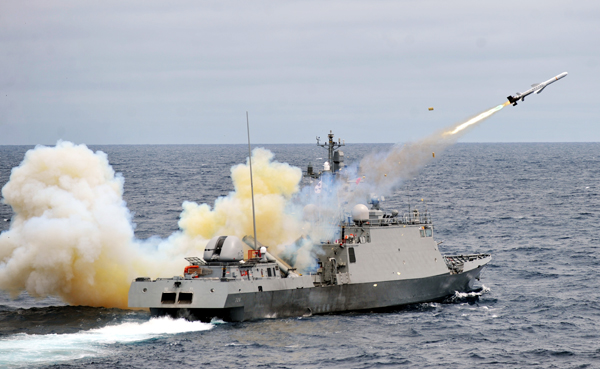 The guided-missile patrol gunboat Parkdongjin fires a haeseong, or sea star, a ship-to-ship guided missile that can hit targets within a range of 150 kilometers, or 93 miles, during an anti-submarine exercise on the East Sea yesterday. [NEWSIS]

The Navy carried out a gunnery exercise in waters near the Dokdo islets in the East Sea yesterday, rejecting Japan’s request Thursday not to conduct the drill as it overlaps with a maritime zone the island nation claims.

The exercise came after North Korean leader Kim Jong-un paid a visit to a North Korean submarine unit. The South Korean Navy said it released information about the drill, which is conducted annually but not usually publicized, as a measure against heightened threat from Pyongyang.

“The drill is intended to deliver a strong message after Pyongyang made provocative comments recently,” said a Navy officer. “But it is a typical gunnery practice that is carried out every year.”

Japan, however, condemned the exercise.

“Given where Japan stands on the territorial issue of Takeshima, [Japan’s name for the Dokdo islets], we cannot allow [the exercise], and I express my deepest regret,” said Japanese Chief Cabinet Secretary Yoshihide Suga Thursday.

“We have requested [South Korea] not to hold the drill through a diplomatic channel,” Suga added.

“The training is executed near the Dokdo islets, which is Korea’s indigenous land. Tokyo’s complaints are not worth considering,” an official from the ministry said.

“Because the drill in the East Sea has nothing to do with the Dokdo islets, we are holding the exercise as scheduled,” a spokesperson from the Ministry of Defense added.

Japan claims that the Dokdo islets and the 12-nautical-mile radius around them is its own territory and that some of the drill’s 148-kilometer by 55-kilometer (91-mile by 34-mile) area overlaps this.

The three-hour training yesterday, which included 19 vessels and three aircraft, mainly focused on performance tests for weapons used against submarines and vessels, including ship-to-ship and air-to-ship guided missiles and lightweight torpedoes.

During the drill, the patrol combat corvette Wonju fired a chungsangeo, or blue shark, lightweight torpedo and hit a target set up 60 meters (196 feet) below the water’s surface, said a Navy officer.

Korean Navy Chief of Staff Hwang Gi-cheol also visited the site during the drills. “When enemy submarines provoke, we must pursue them and bury them in the sea,” Hwang said.