Moon sticks to his guns but criticism mounting

Moon sticks to his guns but criticism mounting 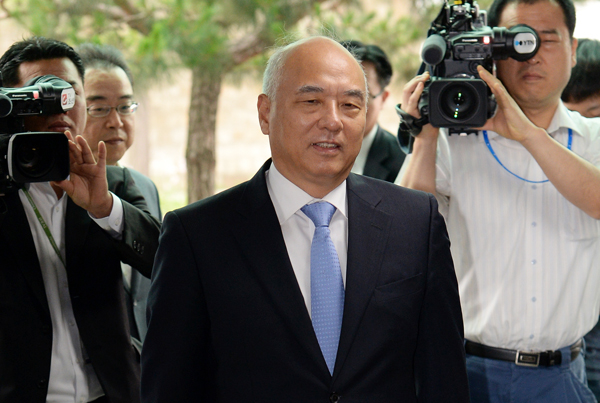 Moon Chang-keuk, the prime minister nominee, yesterday continued to defend himself from criticism of controversial remarks about Japan’s colonization of Korea despite a steady drumbeat for him to give up the nomination from both the opposition and the ruling Saenuri Party.

Moon told reporters yesterday he has no intention of abandoning the nomination and expressed his determination to prove “the truth” at a National Assembly confirmation hearing.

“The important thing is what the truth is,” Moon said. “I am studying hard to prepare for a confirmation hearing.”

The Blue House, with President Park Geun-hye away on a six-day trip to Central Asia, did not announce a withdrawal of the nomination as of yesterday. President Park will return to the country today from her last stop, Turkmenistan.

Moon tried to show that he was not pro-Japan by repeating criticism of Japan’s denial of atrocities during the colonization, including the forcing of Asian women into sexual slavery, and of its territorial claim over the disputed Dokdo islets.

“The forced sex slavery by Japan was definitely a crime against humanity,” he told reporters. “Japan is even trying to deny its own apology for the inhumane crime, which all of the world was angry over.”

He condemned the Japanese government’s re-examination of the historical evidence that led to the 1993 Kono Statement, in which then-Chief Cabinet Secretary Yohei Kono admitted and apologized for the forced recruitment of sex slaves for Japanese soldiers before and during World War II.

“Today, Japan will announce the outcome of its re-examination of the Kono Statement,” he said before the announcement was made in the afternoon. “This is, for me, total nonsense.

“Dokdo is clearly our territory,” he continued. “I don’t understand why Japan is always provoking us whenever we are doing something in our own waters.”

Moon, the former editor in chief of the JoongAng Ilbo, where he worked for 37 years before retiring at the end of 2012, has been embroiled in controversy over comments he made in a church. Moon said that Japan’s colonization of Korea and the division of the Korean Peninsula were all part of “God’s plan” for the Koreans.

Ahn Cheol-soo, co-leader of the main opposition New Politics Alliance for Democracy, demanded yesterday that Moon abandon the nomination along with other nominees chosen by President Park: Lee Byung-ki, nominated to be head of the National Intelligence Service, and Kim Myung-soo, nominated to be education minister.

Sentiment in the ruling party was turning against Moon, too.

Representative Suh Chung-won, a ruling Saenuri Party lawmaker who is known to be close to President Park, called on Moon to abandon the nomination voluntarily.

“Moon should realize he is not the person that people want for prime minister,” Suh said in a radio interview yesterday. “In order to not become a burden for the Saenuri Party, the government and the person who chose him [Park Geun-hye], it would be good for him to step down as soon as possible.”

Suh, who had defended Moon so far, shifted his position ahead of the ruling party’s leadership election slated on July 14. As a strong candidate for the chairmanship of the party, Suh started to request Moon to throw in the towel from Thursday.

In the leadership election, 30 percent of the scores for each candidate will come from a public opinion survey.

A string of high-profile figures told the JoongAng Ilbo that Moon should stick with the nomination.

“Labeling someone as pro-Japan is a very old, typical way to make attacks on conservatives,” said Lee In-ho, former Korean ambassador to Russia. “The KBS report [on Moon’s remarks] was biased and several opportunists in the Saenuri Party are also causing fuss. But no one is giving Moon a chance to give his side of the story.”

Lee Kark-bum, a former Blue House secretary in the Kim Young-sam administration, said, “We should hold a hearing and watch the entire video of his lecture at the church, for one hour and 10 minutes, because the contentious remark was edited, and we can’t understand the context of his words.”