Wie will vie for trophy in final round of open

Wie will vie for trophy in final round of open 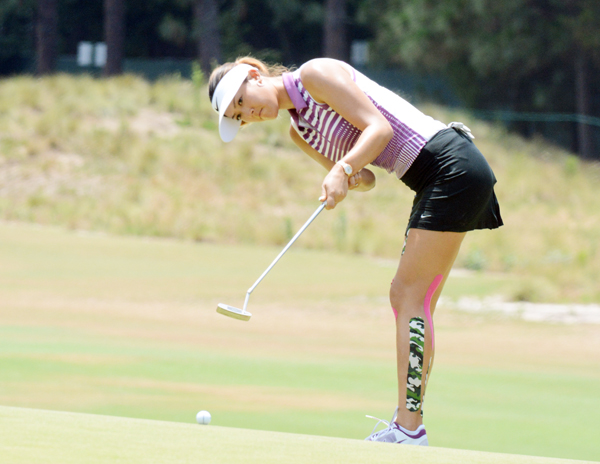 Michelle Wie steadied herself over the last four holes in a wild third round at the U.S. Women’s Open on Saturday, leaving the former teen prodigy from Hawaii one round away from winning her first major.

Wie made back-to-back birdies to build a four-shot lead, only to give it all back with drives all over Pinehurst No. 2. She salvaged a 2-over 72 for a share of the lead with Amy Yang, who didn’t make a par until the eighth hole in her roller-coaster round of 68.

They were at 2-under 208, the only two players still under par on a Pinehurst No. 2 course that was crispy and brittle. The U.S. Golf Association set the course up relative to what the men faced last Saturday in the U.S. Open - short but tough because of the pin positions.

“It’s tough out there,’’ Wie said. “My system got a little overheated. You can’t be in the trees here. But I felt like I grinded out there.”

The big surprise was the tournament-best 66 from Juli Inkster, the 53-year-old Hall of Famer who has said this will be her 35th and final U.S. Women’s Open. Inkster birdied the opening hole and played like she did when she won a pair of Women’s Opens more than a decade ago.

Inkster, who hasn’t made the cut in this championship in five years, was tied for third just four shots behind. She will be in the penultimate group.

Lexi Thompson, who won the first major of the year in a final-round duel with Wie, pulled within one shot with a pair of early birdies. It fell apart on two holes. Thompson missed the green to the left on No. 8 - the worst spot at Pinehurst - and her first chip fell down the slope, leading to double bogey.

On the next hole, she went long over the green at the par-3 ninth, and chose to take relief she really didn’t need from a white line marking the TV tower. Thompson went to the drop zone, and her ball rolled a back into a divot. Worst yet, she still used her putter, and it hopped high out of the divot and had no chance to reach the green. She made another double bogey, then made three straight bogeys.