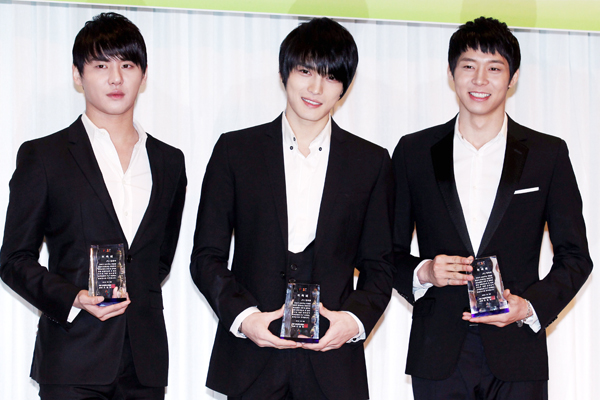 Leading K-pop trio JYJ, which stands for Kim Jae-joong, Park Yu-chun and Kim Jun-su, was appointed the goodwill ambassador to the 7th World Water Forum, which takes place in North Gyeongsang next year.

The organizer announced on Friday that JYJ was selected as the celebrity ambassador to raise awareness of the importance of conserving water in the 21st century.

Since 2010, the band has actively supported governmental campaigns as honorary ambassadors. They were the honorary ambassador to the 2010 G-20 Seoul Summit along with figure skater Kim Yu-na and footballer Park Ji-sung. In 2011, JYJ also supported the Joint United Nations Program on HIV/AIDS (UNAIDS). They will also promote the 17th Asian Games in Incheon.

The three members, who have been pursuing individual roles in TV, movies and musical theater, plan to reunite as a group next month to release a new studio album.