Messi lifts team to 1-0 over Iran, into round two

Messi lifts team to 1-0 over Iran, into round two 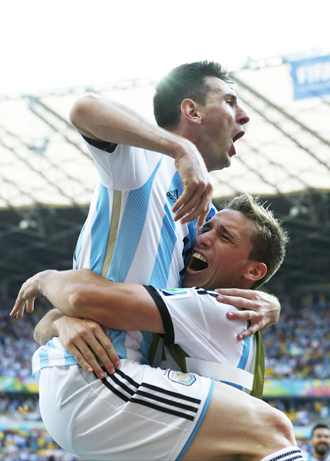 Argentina captain Lionel Messi and record-equaling Miroslav Klose of Germany rode to the rescue of their teams with trademark goals on another day of rich entertainment at the World Cup on Saturday.

Messi snatched a 1-0 win for Argentina against plucky Iran with a typical piece of brilliance that put them in the last 16, while Klose equaled the record for World Cup goals of 15 with a classic poacher’s effort to salvage a 2-2 draw against Ghana.

Messi scored in stoppage time in Belo Horizonte with a superb curling strike, although a moment of genius from the four-time world player of the year added sheen to a lackluster display from one of the tournament favorites.

The goal, a cruel blow for the Iranians who several times came close to taking a shock lead, was enough to put Argentina through from Group F with a game to spare and was Messi’s second of the tournament after his stunner against Bosnia.

“With Messi, everything is possible,” Argentina Coach Alejandro Sabella told a news conference. “Not even two goalkeepers could have stopped that Lionel shot.”

With the clock ticking down, Messi looked to be in an innocuous position when he received the ball on the right in the 91st minute.

Dropping his shoulder and cutting inside his marker as he has done so often for his club Barcelona, he bent a 25-meter left-foot effort into the far corner past diving goalkeeper Alireza Haghighi to send the massed hordes of Argentine fans packing the Mineirao stadium into raptures.

“If we analyze both matches we might say we can play better,” man-of-the-match Messi told reporters. “We know we’re not playing as well as we’re expected [to],” added the 26-year-old.

“When I saw that I had scored I was very, very happy because we were in stoppage time and we wanted to make sure we go through. Then people started screaming, hugging, smiling. It was a wonderful moment.”

After beating Bosnia 2-1 in their opening game, Argentina next face Nigeria in Porto Alegre on Wednesday.

The Super Eagles won their first World Cup match since 1998 with a 1-0 victory over Bosnia in Cuiaba later on Saturday - a result that leaves the Europeans bottom of the group without a point on their World Cup debut and no longer able to progress.

Peter Odemwingie’s 29th-minute goal, swept home at the Pantanal arena after a powerful run and cross by Emmanuel Emenike, lifted Nigeria to second place in the group with four points, behind Argentina on a perfect six.

After a 4-0 demolition of Portugal in their opening Group G match, the Germans looked to be cruising against Ghana when Mario Goetze struck in the 51st minute in Fortaleza.

But the Africans came roaring back, Andre Ayew heading the equalizer three minutes later and a great interception and pass by Sulley Muntari set up Asamoah Gyan to lash home in the 63rd.

Germany leveled in the 71st thanks to a sharp finish by substitute Klose with his first touch of the ball, moving him level with former Brazil striker Ronaldo as the all-time leading World Cup scorer.

Germany has four points, the U.S. three, Ghana one and Portugal zero.

Despite being 36, Klose just about managed to perform a trademark somersault after his goal, a neat half-volley at the far post from a corner.

The best German striker of his generation, Klose is also his country’s all-time leading scorer with 70 goals in 133 games.

“Twenty [World Cup]? matches and 15 goals isn’t bad at all,” Klose told German television. “But what’s important is that we have a good match against the United States.

“I don’t know how long it’s been since I did a somersault but at least it worked out.”

In one of the day’s quirkier stories, the ban on Netherlands captain Robin van Persie for Monday’s Group B decider with Chile means they will not feature a player whose surname begins with “Van” for the first time in almost two decades.

The last time it happened was in 1996 in a friendly against China, some 221 matches ago, the Algemeen Dagblad reported.