For pioneer CEO, family and work both vital

For pioneer CEO, family and work both vital 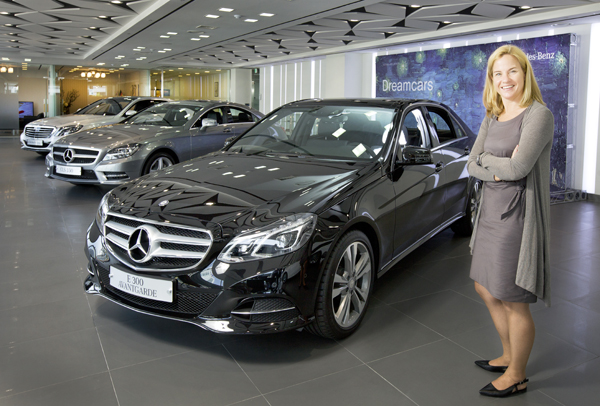 Mercedes-Benz Korea CEO Britta Seeger poses next to an E-Class sedan at an automobile dealer in Yongsan District, central Seoul, on May 26.By Park Sang-moon

As the first foreign female CEO in the imported car industry, Britta Seeger created a buzz in the automobile industry when she was appointed CEO of Mercedes-Benz Korea last year.

Seeger said she didn’t have a dream job when she was young, but as a child growing up in Stuttgart, Germany, the home town of Mercedes-Benz and Porsche, working in the automobile industry seemed inevitable.

So far, her management of Mercedes-Benz Korea has produced good results. According to data from the Korea Automobile Importers and Distributors Association, the German luxury auto brand sold 13,735 units for the first five months of this year, up 40.4 percent from a year ago. The growth is far above the industry average of 23.9 percent and is also the best among the company’s German rivals, including BMW or Audi.

In addition, the sales of the Mercedes-Benz E-Class midsize sedan in Korea in April were the third-best worldwide, behind the United States and China. This made the company’s German headquarters wonder :“What’s going on in Korea?”

But the 45-year-old isn’t just a CEO, she is also a mother who raises three children in Seoul. When asked about which is more important, being a good mom or a good CEO, Seeger simply answered “both” with a smile.

Q. What was your impression of Korea before you landed here? What’s the most interesting thing about this country so far?

A. To be honest, I think perception of Korea is low outside of Asia. Unfortunately, the image of the country is not managed well. For example, if people in Europe are asked if they would like to go to Korea for a holiday, they would probably say yes, but there is nothing that Korea delivers. Before coming to Korea, even I didn’t have a precise image of Korea. But now I’m really positively surprised about what I’m seeing here. What do I like about this country? It’s difficult to say because I’m learning new things every day, but what I really like is that people are very open here. Some people say that Koreans are reserved to foreigners, but not at all. Wherever I end up in the street looking around, people approach me and try to help me even if their English is not good. It’s a pity for Korea that the country is not known enough outside the Asian world because I think it really has a trendsetting role in Asia. But slowly and slowly, I think people are getting to know Korea more and more.

Do you remember that you received a lot of attention when you first arrived here? What was your reaction to this?

I was totally surprised about that big echo because I didn’t expect that much. Maybe I underestimated it or maybe I was just not thinking about it. I was surprised how much people talk about female foreign CEOs in the automobile industry, but as well as all this, topics related with [being a] working mom. But I needed to understand why these things are such a topic in Korea. Some people say female CEOs wouldn’t be a big topic in Europe because it’s common, but there would be an echo there, too. You have also seen this with the new General Motors boss.

Germany isn’t also completely done with this issue, but in comparison to Korea, I think we have had years of longer discussion ongoing about working moms and enabling careers for young women, so that has made a little difference. But I’m experiencing that Korea is starting the discussion to think about how to bring women back to work after maternity. Maybe I was surprised because I didn’t think that Korea had just started - I thought Korea was more ready for this discussion. But don’t consider this as a criticism. It’s just I’m getting to know more about the country. 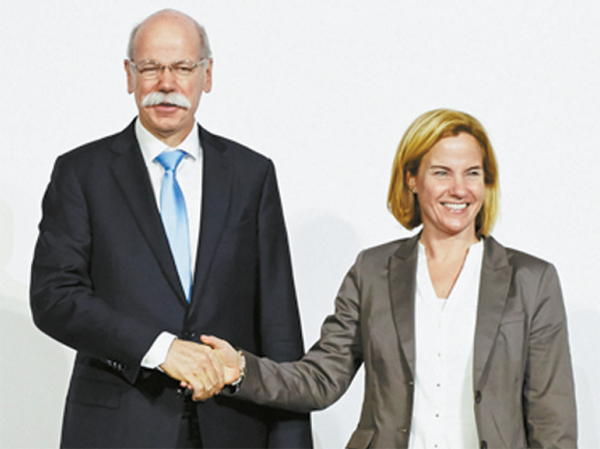 When you first became the CEO of Mercedes-Benz Korea, you reshuffled executives to get them working in different areas. Why did you decide to do that?

First of all, it was my idea. But at the end, we had a long discussion with employees about whether they share the idea because I couldn’t do this against the people, so it took me time to convince them. It’s my deep belief that the higher you get in the hierarchy of the company, the broader you need to have a perspective in order to manage it, because you are becoming more and more of a general manager. So what encourages general management leadership skills? This would be moving and seeing business from different perspectives. The question is how to keep their capability, their motivation and how to bring different thoughts into our overall business. I’m totally positively enthusiastic about the results that I see because just by putting people in new jobs they are facing different challenges.

First, they need to stay on the topic. They will have some uncertainty because they are out of the comfort zone, but this makes them ask their employees [questions] and rely on their people. Employees are also getting encouraged because their boss is not the biggest expert and he or she is relying on the opinion of employees. So for both sides, it was important.

Coming out of a different contact, they also need to ask new questions for the topic, so I think all people start to think more. We got good results out of the first discussions because people are thinking beyond [the usual]. I’m very happy that we did it.

Many female workers in Korea quit their job when they became a mother to raise children. What do you think about this?

I think it’s not up to me to judge other families because it’s really a personal decision that you have to make as a mother, together with the father and for the family. For my case, I was lucky because with my husband, we switched roles. We had good day care facilities and kindergarten in Germany.

If young women decide to stay home to raise children, and if that’s their choice, you have to respect that. But when these young mothers would like to work again, then we have a topic to discuss. The question for Korea, which Germany is facing, too, is how is the overall infrastructure set up in order to encourage both parents working? Is there enough day care? Can you trust the day care? Is it supported either by companies or the government? Is it easy to access? These kinds of questions are the key decisive questions for our society. It will take some time and you could hear criticism, like I did, that you are leaving your kids alone. But this is something you have to manage yourself. As long as parents get along and say “we made the right decision” and the family is doing well, I think it’s a fair decision and you can overcome the criticism from outside.

Generally, Korean moms are referred as “tiger moms,” who take care of their children from A to Z, but in the Western world it’s more about giving them free choice. What’s your style?

I always said I want to have children who are self-confident and that if I want to have those kinds of children then I need to give them some room. I can’t take over responsibility on each and every thing for them, so they need to take care of it by themselves. This is also a personal thing because I think that in the long run, my kids need to survive in this world and therefore they need to manage themselves. But there is also big implication because people who are self-confident don’t always follow what you say because they have their own opinion. This we have to take into consideration, and there are consequences. This also applies to work. When there is a self-confident employee who has a different opinion to the order, then we have to get into discussions and arguments, which consumes more time.

But don’t forget we have a different system in Germany. One of my Korean employees told me that his children wake up at 7 a.m. and stay up until midnight during the week. This is out of the question for any Westerner. I think we [in Germany] have more of a chance to give freedom to our kids because the pressure is different compared to Korea. Here, I heard that you need to have a certain number or ranking to enter certain universities, and if you can’t enter certain universities, in the long run you will have problems for finding a good job.

The system in Europe is not that strict. People who have a different approach may get a good chance to develop a career. I think that’s the biggest difference. So, I think that there is a good reason for Korean moms to be called “tiger moms.”

Do you see a difference between managing a company as a CEO and managing a family as a mother?

If you ask me the basic principles of living in a community either in a company or family, I think the basic principles are always the same. We need to listen to each other and we need to take care of each other. Also, we all need to be very authentic because that’s very important in a family. They rely on me because they can trust me. This is same with my employees. If I don’t do what I say, how can’t they trust me? 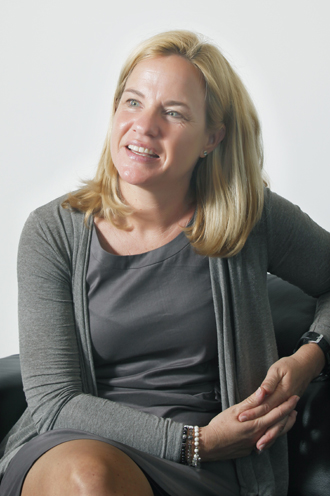 2000-2003: Senior manager for the automotive e-retail and customer-connect business