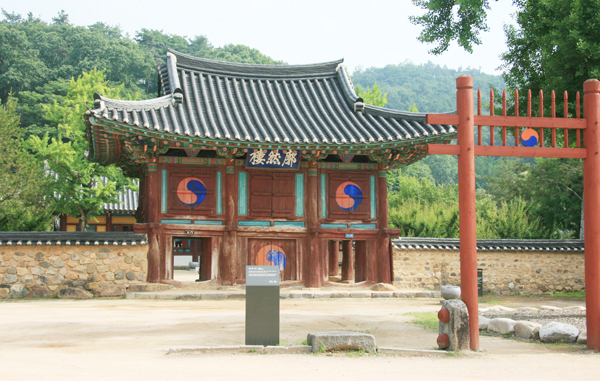 The main entrance gate to Jangseon, South Jeolla’s Pilam Seowon, a private educational center from the Joseon Dynasty (1392-1910), is pictured above. Provided by the Confucius Culture Development Group

The common theme of a few of the most successful travel tours, such as the Olleh Trail on Jeju Island or Buddhist temple stays across the nation, is that they all used existing resources to develop a new cultural trend.

Using this as inspiration, the Confucian Culture Development Group under the Tourism Sciences Society of Korea decided to make better use of what’s left of Confucianism to create another travel movement.

“Yeoyu, the travel of learning” uses some of the 900 hyanggyo, or public school, and seowon, or educational centers, from the Joseon era (1392-1910) that are still left across the country. Yeoyu means “relax” in Korean,

While the Olleh Trail focuses on natural landscapes and Buddhists emphasize the experience of healing to promote their temple stay programs, the group has chosen “education” as a keyword to represent Confucian teachings.

“Before, when trying to spread the teachings of Confucianism, experts focused on ancient values that modern generations cannot really relate to,” said Han Kyo-nam, a senior researcher who coordinated the trips. “So we have come to decide that we need to give what people in the current generation need the most, and that is education.”

Confucianism is an ethical and academic value developed from the teachings of the Chinese philosopher Confucius (551-479 BC). It was first introduced in Korea during the Three Kingdoms Period (57BC-AD668) around the second century and was then adapted further for locals. It was widely studied, especially in the Joseon era (1392-1910), and became a basic idea to help decide what is inappropriate or not in terms of behavioral decorum, as the original teaching puts an emphasis on benevolence. 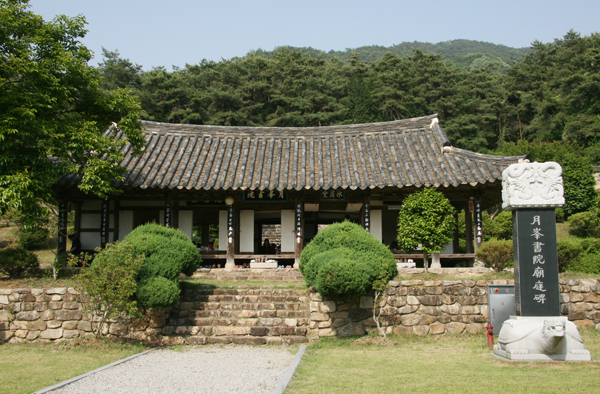 Wolbong Seowon, a school from the Joseon era, is located in Gwangju.

Before the group decided to launch its new travel theme in 2013, with the help of the Ministry of Culture, Sports and Tourism, the government invested in providing financial support to keep the tradition alive.

“Although it is hard to tell whether Confucian values are the most suitable teaching for society at the moment, it seems many think that Confucian values are laid in the background of people’s spirit here,” said Cho Sook-ju, deputy director of the Culture Ministry’s Religious Affairs Office.

“We wanted the values and traditions to be more readily practiced and learned by a broader range of people as we graft it with tour programs to help remind people about benevolence or basic behavioral decorum, which seems to have slowly been forgotten these days and could stop some ill factors spreading in society,” added Cho.

The group recently wrapped up its programs for the spring season to prepare for new ones in the fall. This reporter joined the last trip of the season earlier this month.

Following Confucian values during the trip took a lot of patience. I demonstrated the common decorum expected when ancient Joseon scholars invited a guest to their homes. It is proper manners to ask a visitor three times if they want to come inside the house before the host, who comes to stand outside the door, goes back in. A guest should also refuse to take whatever the host offers twice before accepting the proposal when the question is asked for a third time.

It was fun to try out Confucian manners the first few times, but it continued endlessly, so I soon tired of it. After I walked into the room, I was asked three times if I wanted to sit down, and again if I wanted to eat something from the table.

Focusing too much on asking and answering questions, I barely found any enjoyment in the midday cocktail hour. Wearing a traditional garment, which had long sleeves that came down to my knees, also didn’t do much to help during a very humid almost-summer day.

Left: A classical music concert at Wolbong Seowon at sunset. By Shim In-seob, Right: Visitors to Jeonju Hyanggyo, a public education enter in the Joseon period, try out garments worn by Joseon era scholars and learn about Confucianism.

“Our ancestors kept these manners to check if they really mean what they are asking others,” said Kim Sun-seok, vice president of a traditional cultural training center at Jeonju Hyanggyo in South Jeolla.

“Although it seems unnecessary through the eyes of the current generation, it was one way to show respect to one another and to reveal their warm heart in hosting a guest.”

The subsequent archery practice made all the program’s participants forget about the previous session’s struggle and allowed them to focus on finding inner peace and clearing their mind by focusing on the arrows hitting the target.

We visited one hyanggyo and two seowons in South Jeolla. At Jeonju Haynggyo we learned how rituals were executed back in the days, and at Wolbong Seowon we got to enjoy an intimate music concert with a 30-something audience at sunset in a hanok, or traditional Korean house.

At Pilam Seowon, we learned about how calligraphy was an important part of a Joseon scholar’s life.

What I experienced during the trip was only a very small part of the program the organizer has developed in the past year. The group specifies a target audience for its tours based on age.

So far, there are five programs - for infants and pregnant parents, children and students, people in their 20s and 30s, parents of grown-up children, and the elderly.

Parents-to-be can take a trip to learn about parenthood. They make a wreath with the items their ancestors would have used to announce a child’s birth. Students, on the other hand, learn how to articulate their thoughts in writing, necessary training for Korea’s educational system.

People in their 20s and 30s learn about how to participate in discussions, while those in their 50s learn how to communicate better with their grown-up children.

The elderly are offered a relaxing time through traditional music performances.

“We wanted to make the programs something you can participate in more than once,” said Han.

“And since we are going to let each hyanggyo and seowon develop their own programs based on resources they can find in nearby areas, there will be more varieties in the future, including a program for foreigners that will become available in the fall season.”

Cost for participation will also be announced later.

New tour programs for “Yeoyu, the travel of learning” will be available in September.