A soldier runs away with live ammo after shooting spree

A soldier runs away with live ammo after shooting spree 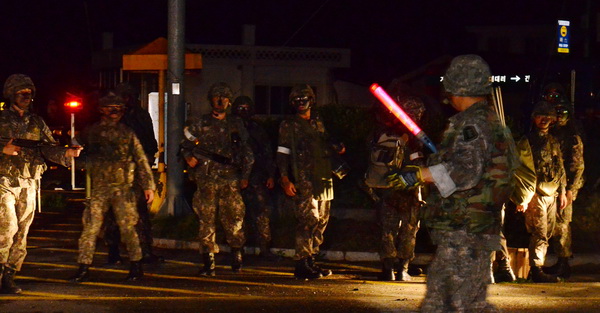 A Korean sergeant killed five soldiers in a shooting spree at a general outpost in Gangwon Province Saturday evening and is still on the loose.

Seven other people were injured by the suspect, who has been identified only as Sergeant Lim in the 22nd Infantry Division in Goseong County in Gangwon, near the border with North Korea, according to the Army.

Lim fired around 10 shots with his K-2 rifle near a general outpost at around 8:15 p.m. on Saturday, before fleeing. He was armed with a grenade, a gun and some 60 rounds of ammunition.

The Ministry of National Defense set up a crisis management team yesterday and is working with the army and police officials to track down Lim, including setting up checkpoints across neighboring counties and cities.

The identities of the victims are currently withheld by the Army but include a staff sergeant, sergeant, a corporal and two privates.

The injured are being treated in the hospital, and their lives are not in danger.

Lim reportedly had difficulties adapting to the military and had been on a list of soldiers requiring special attention.

Defense Ministry spokesman Kim Min-seok yesterday in a briefing this morning said, “We apologize to the Korean people for causing anxiety,” and pledged that the ministry will work towards capturing Lim and preventing future such accidents.