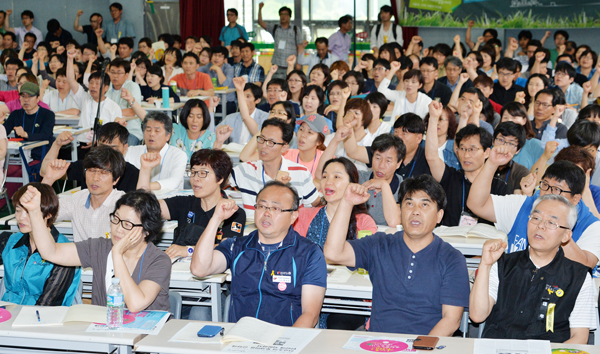 Members of Korean Teachers and Education Workers’ Union gathered at Mount Moobong Youth Camp in Pyeongtaek, Gyeonggi, on Saturday to discuss ways to reverse the ruling that stripped the liberal union of its legal status. [NEWS1]

Members of the Korean Teachers and Education Workers’ Union (KTU), the country’s largest liberal teachers’ union, are gearing up to protest the court ruling last week upholding the ban on its legal status.

The union said that it will lodge an appeal to Seoul High Court today after holding a press conference this morning.

The organization’s key members held a convention over the weekend in Pyeongtaek, Gyeonggi, where about 300 members discussed plans to hold a series of nationwide rallies and fundraising schemes for their demonstrations.

The move came after the Seoul Administrative Court on Thursday dismissed KTU’s request to nullify an order by the Ministry of Employment and Labor that places the union outside of legal protection.

The Seoul Administrative Court came to its decision on the grounds that the union allowed former teachers who had been removed from their positions to join the organization. By law, dismissed workers are barred from joining labor unions.

Once an entity is stripped of its legal status, members are deprived of collective bargaining rights, and the Ministry of Education may take further action, requiring teachers working full time at the union to return to their schools.

The beleaguered group said yesterday that it will not comply with the ministry’s order. “We won’t let full-time workers return to school. The head [of the KTU] will decide specific details on the matter,” the association said in a statement.

As part of the protest, teachers nationwide who are members of the union will cut short their school hours on Friday to participate in a planned rally. The Ministry of Education warned that such collective action constitutes a violation of the Public Education Officials Act.

In 2006, when teachers from the union left their schools early to participate in a protest, the ministry imposed disciplinary measures against 300 unionized teachers for breaching the Public Education Officials Act and labor law.

In line with the protest, members will also hold a general rally on Saturday at Seoul Station, in central Seoul.

In addition, the teachers’ association outlined plans to raise funds for upcoming demonstrations, encouraging members to donate 100,000 won ($98) each. A total of 60,000 teachers and educators are registered in the union.

KTU continued to argue that the ruling was politically motivated and claimed the current government merely disagreed with the group’s political ideology.

Though the court denied KTU’s legal status, it remains to be seen how tough the Education Ministry will be in implementing the ruling, particularly when considering the victories of 13 liberal superintendents in the local elections earlier this month.

Of the 17 positions contested, liberal candidates won 13 seats. Eight of those victors were former KTU members, who will likely oppose the Education Ministry’s move to dismiss the union. In implementing measures to strip the union of its legal status, the education minister will need the cooperation of regional superintendents.

However, the liberal superintendents hinted that they would support KTU, expressing regret over the court ruling last week.

The Korean Federation of Teachers’ Associations, a conservative teachers union, already expressed its discontent with the newly elected liberal superintendents, saying its members would disobey the new superintendents’ orders if they continued to increase tensions.

The new education chief will take office on July 1.