Coach and players at a loss vs. Algeria

Coach and players at a loss vs. Algeria 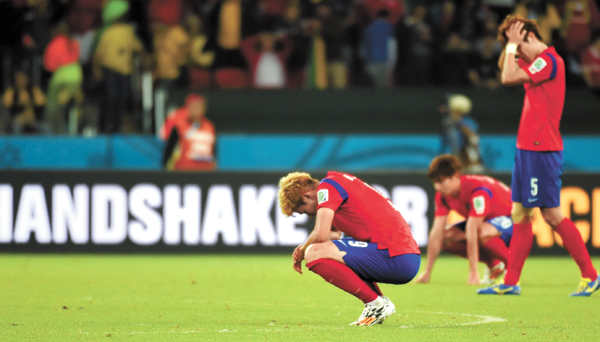 Son Heung-min, left, and other Korean players react after they lost, 4-2, to Algeria on Sunday, local time, in the 2014 Brazil World Cup Group H match in Porto Alegre, Brazil. [XINHUA/NEWSIS]

It was the worst nightmare for Korean football since the turn of the millennium. The Taegeuk Warriors were hunting for their first win of the 2014 Brazil World Cup; instead they were hunted by a pack of desert foxes from North Africa.

In a Group H match at Porto Alegre on Sunday, local time, Korea was overpowered by Algeria, 4-2, in a series of lapses by four back defenders who looked like a group of middle school students against the speed and individual skills of their opponents.

Before the match, Korean Coach Hong Myung-bo appeared confident of his team’s first World Cup victory, but soon after the referee blew the start whistle, the players were outclassed by the Algerians, who dominated the entire field with systematic and aggressive pressure, speed and intensity.

Algeria moved into second place in the group at three points, behind Belgium, which beat Russia, 1-0, earlier in the day.

Korea and Russia, which drew 1-1 in their opening game, have one point each, but Korea is in last place by goal difference.

First half: Swept by sandstorm

Looking at the starting lineups of both teams, it is obvious Algeria Coach Vahid Halilhodzic walloped Hong tactically. Hong stuck to his best 11 players led by striker Park Chu-young, who again failed to attempt a single shot in 56 minutes on the pitch. Compared to Algeria’s starting lineup against Belgium, five new faces were inserted to beef up the offense, a move Halilhodzic announced prior to the match.

The Algerians unleashed their goal spree over 38 minutes of the first half. They dominated possession as their forwards and midfielders aggressively challenged Koreans in a tactic similar to “gegenpressing,” a highly organized approach to regaining possession and minimizing space developed by Borussia Dortmund of Bundesliga.

Under the intense pressure, Korean defenders frequently let Algerians destroy their off-side trap and break into the goal area as they gave up possession on their own side. The looked terrified whenever they had the ball, which made it difficult for them to connect with pass master Ki Sung-yueng, the starting point for the Korean offense.

In the 26th minute, Slimani put the ball into the right corner of the net over goalkeeper Jung Sung-ryong, beating two Korean center-backs - Hong Jung-ho and Kim Young-gwon - after receiving a perfect through pass from Carl Medjani.

In the 38th minute, Korean fans at Beira-Rio Stadium and at home, many of whom were awake until early yesterday morning, had to see Abdelmoumene Djabou score the third goal.

“We lost the match because we allowed too many goals too early before our defensive wall was built,” Coach Hong said. “Our defenders completely failed to communicate with each other whenever the opposing attackers moved in. They were lacking concentration and weren’t able to stop Algeria’s offense, but overall, everything is my fault. I prepared many things, but they just didn’t work out.” 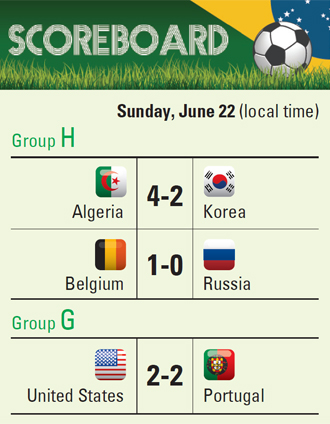 The Taegeuk Warriors didn’t give up in the second half.

Just like what the Algerians had done earlier, Koreans moved forward to press the opponents. The efforts paid off in only five minutes as “Sonsation” Son Heung-min scored the team’s first goal after eluding two Algerian defenders at the left edge of the goal area. As Son started to fly with his speed and dribbling, Korea started to take control of possession and create scoring chances with more open spaces.

But the change in momentum didn’t last long as Brahimi found the net on the counterattack, making Algeria the first African nation ever to score four goals in a World Cup match - sending the Koreans into despair.

In the 57th minute, thankfully, Hong replaced striker Park Chu-young with 196-centimeter (6-foot-6) Kim Shin-wook. With the giant in the center creating some chances with headers, Korea started to bounce back, leading team captain Koo Ja-cheol to score the team’s second goal in the 72nd minute.

Although the 21-year-old Son is the youngest player on Hong’s squad, he was the only one who showed his best fighting spirit from beginning to end. His fancy dribbling and shooting skills provided some hope for disappointed Korean fans, who see him as the country’s potential ace player in the future.

“I’m very sorry to our fans who supported us in the stadium and at home because we couldn’t meet their expectations,” said Son. “I think we somehow lost our concentration in the first half and that made the game so difficult. I will try my best to win the next match against Belgium.”

But it looks like Brazil will be remembered as an awful place for Korea’s team, as Park once again failed to do anything on the field despite his coach’s faith in him. The striker often seemed unable to keep up with the tempo of the game, proving that picking someone who hadn’t played enough time for his club team was a clear mistake. The question is whether Hong will sideline Park in the next match.