How sweet it is for Wie to finally win first major

How sweet it is for Wie to finally win first major 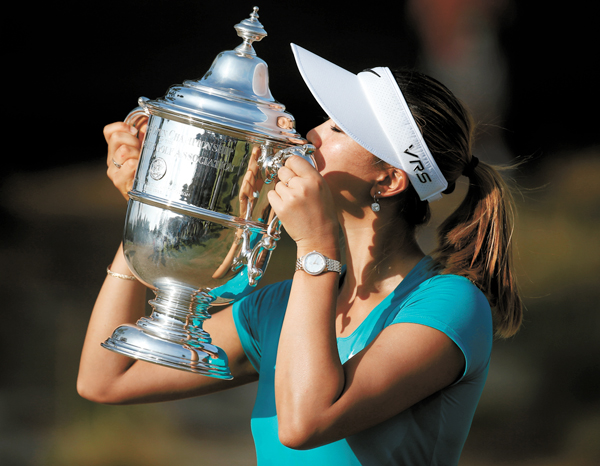 Michelle Wie kisses the trophy after winning the U.S. Women’s Open golf tournament on Sunday local time in Pinehurst, North Carolina. “I’m so honored to have my name on the trophy,” she said, “just so grateful for everything.” [AP/NEWSIS]

Michelle Wie finally lived up to the burden of expectation when she won her first major title with a clutch two-stroke victory at the U.S. Women’s Open in Pinehurst, North Carolina, on Sunday.

More than a decade after becoming famous when she almost made the cut against the men in a PGA Tour event, the 24-year-old from Hawaii was emotionally moved after winning the biggest prize in women’s golf.

“I’m just unbelievably happy,” she said after shooting even-par 70 to hold off fellow American Stacy Lewis (66) at Pinehurst No. 2.

“I’m so honored to have my name on the trophy, just so grateful for everything.”

Wie seemed poised to win in style until she double-bogeyed the 16th hole after almost losing her ball in a thick clump of wire grass after a poor second shot.

It took almost two minutes to locate the ball and she subsequently chose to take a penalty stroke, eventually sinking a five-foot putt to avoid dropping three shots.

“I definitely gave myself a heart attack when I couldn’t find that ball,” she said.

“I was stressing out for sure. I also left myself a hefty double-bogey putt. All you can do at that point is laugh. I joked with my caddie that we really like to make things difficult for ourselves.”

Wie has a reputation for not being a strong closer and, whether that is warranted or not, the pressure was immense when she stepped to the par-three 17th tee with a tenuous one-shot lead.

But she responded magnificently, sinking an 18-foot birdie that she described as “the best putt of my life.”

After par on the last to secure victory at two-under 278, she lifted her right hand to her mouth as if she could not believe what had happened, before breaking out in a huge smile.

Wie, who previously had twice led into the final round at the Women’s Open, collected $720,000.

It has been a long and winding journey for someone who was barely a teenager when she saddled herself with huge expectations by saying she thought she belonged on the PGA Tour (as well as the LPGA circuit) and wanted to play the Masters.

She earned fame in 2004 when she came within one stroke of making the cut at the Sony Open in Hawaii on the PGA Tour, but flopped in subsequent appearances in men’s tournaments and has since stuck with women’s events.

Injuries and a stint at university temporarily halted her march to LPGA dominance, but she remained determined to fulfil her immense talent.

“Obviously there are moments of doubt in there, but I had so many people surrounding me... That’s what pushed me forward,” she said after avoiding a single three-putt on some of the toughest greens in the game.

Wie’s triumph capped off a fortnight of championship golf at Pinehurst No. 2, where German Martin Kaymer won the men’s U.S. Open seven days ago.