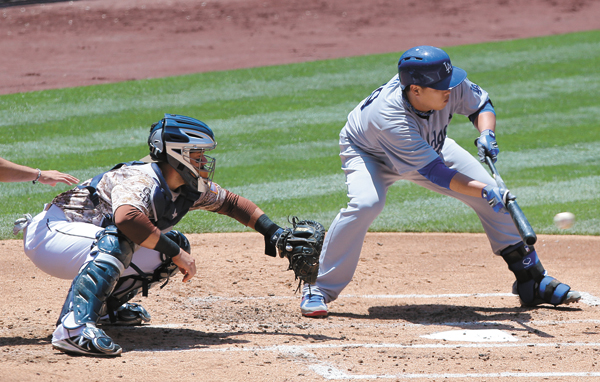 Ryu Hyun-jin lays down a sacrifice bunt in the second inning against the San Diego Padres yesterday to advance runners to second and third base. Dee Gordon then singled in Scott Van Slyke for the Dodgers’ second run. [AP/NEWSIS]

There is something about the Padres and playing them in San Diego that agrees with Ryu Hyun-Jin and the Los Angeles Dodgers.

Ryu (9-3) had few problems against the light-hitting Padres, as he won for the sixth time in seven starts since missing more than three weeks with shoulder inflammation.

“I try to be aggressive in every ballpark I pitch in,” said Ryu. “Today, I think the main thing was control. I was able to keep the ball down early and that was the story.”

The Dodgers, winners of 10 of 14, took two of three games in the series and have either won or split their last 11 series in San Diego.

“It felt good to get this series,” said Los Angeles Manager Don Mattingly. “We got a couple of runs early and you’d like to keep tacking on. Hyun-Jin was throwing the ball good and our bullpen did a nice job to hold on for the series.”

The left-handed Ryu gave up one run and four hits and did not allow San Diego to get its first hit until the fourth inning.

“He got off to a good start,” said Dodgers catcher A.J. Ellis. “He kept them off balance the first time through the lineup. They made some good adjustments, made him throw more in the middle innings.”

In three career starts against the Padres, Ryu has allowed only two earned runs in 19 1-3 innings.

J.P. Howell pitched 1 1-3 perfect innings and Brian Wilson got two outs before Kenley Jansen finished off the four-hitter by pitching the ninth for his 22nd save in 25 chances.

Hanley Ramirez got the Dodgers going in the first with a one-out single. He stole second and took third on a wild pitch when Stults walked Yasiel Puig. Ramirez scored on Gonzalez’s ground out.

Ryu helped himself in the second when his sacrifice bunt advanced Scott Van Slyke and Ellis. Gordon drove in Van Slyke with an RBI single to right but Ellis was thrown out at home by right fielder Chris Denorfia.

Denorfia had two hits off Ryu, including a leadoff double in the sixth. After a groundout advanced him to third, Denorfia scored on Carlos Quentin’s groundout.

Mattingly decided to pull Ryu after the sixth because he sensed his starter was getting tired.

“I would like to go deeper in the game but toward the end, I felt a little bit more fatigue,” Ryu said. “After talking to Donnie about it, he made the call.”

Said Ellis: “It was typical Hyun-Jin. He gave us a chance to win the game. He makes big pitches when he has to. He comes to win.”

Stults rebounded from a string of six straight subpar starts as he allowed two runs on six hits in a season-high seven innings. He struck out five and walked three. It was just the second time in 24 starts that the lefty has walked more than two batters.