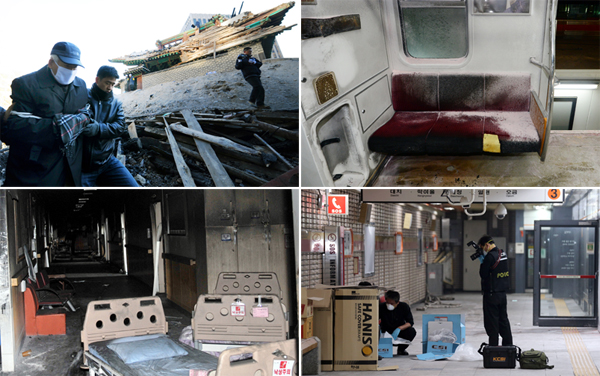 Clockwise from top left: A series of three arsons committed by three different seniors. The nation’s No. 1 national treasure, Sungnyemun, was burnt to the ground in February 2008 by the 69-year old man Chae Jong-gi. A 71-year-old surnamed Cho committed arson in a subway car at Dogok Station, as a way to vent his anger late last month. The police investigate the crime scene at Dogok Station, southern Seoul. A nursing home in Jangseong, South Jeolla, was set on fire by an 81-year-old resident surnamed Kim late month. The fire killed 21 and injured eight. [JoongAng Ilbo]

Chief inspector Kim Man-wuk, who works for the special victims unit at the North Chungcheong Provincial Police Agency, often has to take on sexual abuse cases involving vulnerable people such as minors or the mentally disabled.

But he recently got away from his daily routine to do something else: lecture elderly people in their 60s and 70s on what constitutes a sex crime.

Kim gave the talks at 14 different senior community centers within the province between March and May.

The chief inspector arranged for the lectures to be conducted in plain language in the hopes of “preventing some sexual crimes by older people.”

“I asked them not to touch the breasts or private parts of girls even if they think the girls are cute and pretty,” said Kim.

“I can’t give you exact numbers, but sexual crimes by seniors are really increasing.”

And Kim’s opinion is backed up by statistics. According to the Supreme Prosecutors’ Office, rape cases committed by people aged over 61 stood at 423 in 2006, but the number soared to 1,045 in 2012 - a nearly 150 percent increase.

During the same time span, the elderly population increased by 29 percent, and the number of crimes in all categories committed by seniors jumped during the same period. But analysts say the growth rate of senior crime surpasses that of the increasing aging population.

Recent news stories subvert stereotypes about older people. People tend to think that the elderly are physically weaker than the younger generation, but they are also believed to be more wise, experienced and level-headed. Yet some seniors have the capacity to commit brutal crimes.

The individuals convicted of a nursing home fire in Jangseong, South Jeolla, and a Seoul subway car arson at Dogok Station are in their 70s and 80s. A male sexagenarian was charged with sexually abusing four girls at an elementary school in Yeongam, South Jeolla. He even took semi-nude photos of the girls in broad daylight.

Each of these high-profile crimes happened between the last week of May and the first week of this month.

Since Korea will move from an aging society to a super-aged society in the near future, in which one out of four people will be a senior over 65 by 2030, analysts say we need to look into crimes by members of this age group and discover what is causing them.

According to the recent offenses, crimes by the elderly are roughly divided into three types: crimes driven by frustration and anger, sexual crimes and crimes committed for a living.

The most recent arson at Dogok Station late last month was committed by a 71-year-old surnamed Cho as a way to vent his anger.

Cho told the police that he had been involved in a decade-long lawsuit for damages incurred when a septic tank overflowed at a business he operated 15 years ago. He was not happy with the compensation he received, which was far lower than expected.

Eventually, Cho came all the way to Seoul from Gwangju, South Jeolla, and set fire to seats in a subway passenger car. He was caught with 11 bottles of flammable liquid and four bottles of butane gas inside his backpack.

Kim, 81, who was charged with causing the fire at the nursing home in Jangseong, where he lived, is known to suffer from dementia and had trouble with employees and other patients there. The fire killed 21 and injured eight.

But the most infamous arson in Korea dates back to February 2008. The 69-year-old man Chae Jong-gi set fire to Sungnyemun, the old city gate known as Namdaemun, and the 600-year-old No. 1 national treasure burnt to the ground in a few hours. 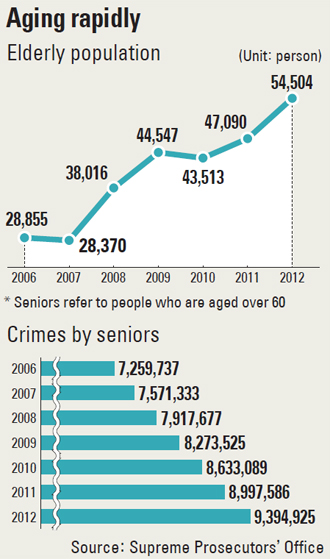 Chae told the police that he was discontent with the amount of compensation he received when he was forced to give up his house to a construction company. He decided to torch the wooden structure in protest and was sentenced to 10 years in prison that same year.

It was not the first time for Chae to commit arson, however. He previously burnt a part of Changgyeong Palace in 2006 but was sentenced to just 18 months in jail and two years of probation. He set fire to Sungnyemun during his probation period.

“Looking at elderly crimes, I can sense the frustration, isolation and anger that prevails in elderly society,” said Pyo Chang-won, head of the Pyo Institute of Crime Science.

In criminal psychology, dissatisfaction or frustration is considered one of the three major factors that trigger crimes, along with the absence of a guardian and suitable targets.

“Their desires can’t be met within their families or other relationships in normal ways. Then the unfulfilled desires deep down in their mind develop small quarrels into violence or crimes,” Pyo added.

The older generation in their 60s, 70s and 80s were taught to respect and support their parents for moral and ethical reasons, but their grown-up children no longer uphold these traditional values.

Seniors also struggle to find their feet in an industrial society.

“Their experience and expertise in farming is not appreciated anymore,” wrote Lee Dong-wu, a professor of psychology at Inje University Seoul Paik Hospital, in a column published last week by the JoongAng Ilbo, an affiliate of Korea JoongAng Daily.

Feelings of isolation and less support of seniors by the younger generation are the third- and fourth-worst difficulties the elderly face, according to a survey conducted last year by Statistics Korea. No. 1 and No. 2 were financial problems and health issues.

“Today’s young Koreans are like ‘we will respect you when you deserve it,’?” said Pyo.

This differs from the sense of filial duty upheld by the older generation in the past, which stresses unconditional obedience to the elderly.

“The fall of the long-held practice [of respecting older people regardless of their actions] surely plays a part in fueling the anger and frustration of older people,” added Pyo.

Sex crimes by seniors are also increasing rapidly. These felonies seem unrelated with the anger and frustration of older people, but analysts say the two are closely connected.

“Not only sexual desires but their other desires and frustration are often expressed in the form of sexual crimes,” said Pyo.

“For this reason, sexual molestation happens more often than rapes among older people. They also target minors who they think are physically weaker than them.”

Regarding the increasing sexual crimes committed by elders, Lieutenant Kim said, “[Elderly people] easily get access to lots of obscene materials with their smartphones than before, but they have nowhere to relieve their sexual drive. They eventually approach the people who are physically inferior to them.”

According to Gu Sung-ae, the head of the Pureun Ahwuseong, a well-known private sex-education institute, “All kinds of accessible pills including Viagra surely increase chances of sexual crimes by seniors.”

Seniors are more sexually active than we may believe. In 2012, the Ministry of Health and Welfare ran a survey on 500 seniors aged over 65 and found that two out of three, or 66.2 percent, regularly have sex.

Crimes for bread and bacon

Financial insecurity is also a major pillar of elderly crimes.

In February, a 74-year-old woman was sent to a prosecutors’ office for stealing 30,000 won ($29) worth of food, including beef and hair-tail fish, at a discount store in Songpa, southeastern Seoul.

It turned out that her grown-up son had left for the United States 20 years ago and that she had been living on the government’s basic living subsidies since. Because of her circumstances, she was not charged with the theft.

The poverty ratio of Koreans aged 65 and above is the highest in the Organization for Economic Cooperation and Development.

Most recently, the OECD issued the “2014 Economic Survey of Korea,” a biennial report on its member countries. It said the Korean government needs to lower the elderly poverty rate of 49 percent, which is far higher than the OECD average of 13 percent.

The higher poverty rate makes elders more likely to commit crime, like the woman in Songpa. The number of thefts by people aged over 60 in 2006 was 1,929, which rose to 6,303 in 2012, according to the Supreme Prosecutors’ Office.

Kim Jin-su, a professor of social welfare at Yonsei University, however, begs to differ. He thinks money is important but that it can’t solve all the problems seniors face.

“We shouldn’t consider money as a cure-all,” said Kim. “Sweden already had a perfect welfare system and social safety net for seniors in the 1970s, but the country’s elderly suicide rate was the highest [among European countries].

“It means we have to think of all the possible ways to improve lives of seniors apart from injecting financial resources into them,” Kim added.

The Seoul Institute, a research company under the Seoul Metropolitan Government, also published a report last month saying a substantial enough income doesn’t improve the overall quality of life for seniors. Elders with decent incomes were unsatisfied with their lives because they felt deprived of health and meaningful social engagement.

The report concludes that the demands of seniors for better lives are diverse and that there should be varied plans put into place to improve the situation for this age group.

No more mercy for old men

With the ever-growing aging population, Korea should offer more for seniors who are lost in the changing social landscape if it wants to prevent further disasters.

And there should be comprehensive care plans for older people, analysts say.

“Children no longer live with their parents,” said Chung Kyung-hee, a senior researcher at the Korea Institute for Health and Social Affairs. “In the past, not only families but the community as a whole took care of seniors, but not anymore. We have to think about ways to shore up individuals’ relationship networks.”

Kim, the professor of social welfare at Yonsei University, also has a similar take on the issue.

“Let elders take care of each other,” he said. “Seniors who are healthy and affluent can take the lead while elders who are healthy yet cash-poor can bridge the gap between the elders on the top and in the bottom brackets who are poor and ailing.”

Meanwhile, Lee Su-jeong, a professor of criminal psychology at Gyeonggi University, said society should look at elderly crimes from a different perspective without down-playing them.

“Times have changed, and many older people are still alive and kicking, but a majority of people still tend to think lightly of elderly crimes,” Lee said.

She took the Sungnyemun case as an example.

“Arson is a serious crime, but the man had already started a fire at Changgyeong Palace, which is an important historical site, years before he burnt the whole of Sungnyemun.

“He must have been under a special probation, but maybe he wasn’t because people probably thought of him as a grouchy old man. Society should not consider seniors as weak and old anymore. We have to seriously redefine the meaning of an old man.”