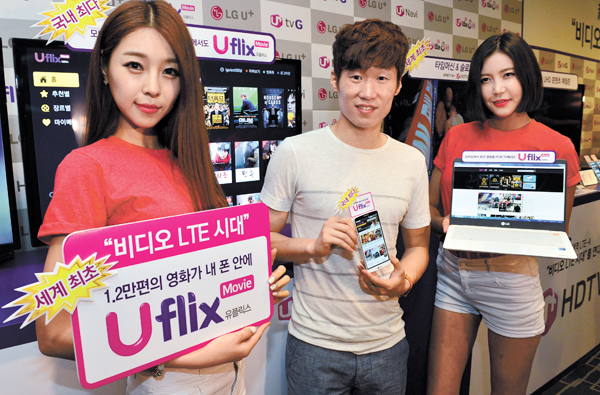 The carrier launched a mobile movie monthly plan with 12,000 films, and also said it will start selling the Galaxy S5 LTE-Advanced on Thursday.

“We have completed building the three-times faster nationwide broadband network by combining broadband frequencies,” said Choi Joo-sik, senior vice president of LG U+ Service Creation. “After launching the Galaxy S5 Broadband LTE-A this Thursday, we plan to introduce six to eight LTE-A smartphones within this year.”

LG U+ said that its delay in debuting the broadband LTE-A service was the result of SK Telecom and Samsung Electronics abusing their power as leaders in the mobile phone industry.

“Samsung Electronics’ early supply of Galaxy S5 Broadband LTE-A to SK Telecom is an unfair business practice,” said Choi. “The No. 1 service provider is supposed to be competing for quality of services and prices. The act of preventing a global manufacturer from supplying the device to other competitors must be eradicated.

“Samsung should not show preference for SK Telecom just because SK Telecom’s sales volume is larger than other carriers,” he added.

But the company said people will be pleased with its video services.

On UFlixMovie, users can watch 12,000 videos for 7,000 won ($6.86) a month. The company’s mobile TV service U+HDTV has been updated so that users can save programs that they are watching in real time for two hours.

Video service expansion takes an increased amount of data and slowdowns will be inevitable on unstable networks, but LG U+ Network Vice President Lee Chang-woo said that the problem will not severely affect the company.

“When compared to competitors, we have fewer LTE subscribers and a wider frequency bandwidth,” he said. “We can provide a stable network even if there is a massive amount of data usage through video services.”

The actual download speed of LTE-A will be closer to 70 to 80 Mbps during periods of high use, and is only 225 Mbps in theory.

“Basic LTE provides a 20 to 30 Mbps download speed on a commercial network, while broadband LTE provides 50 to 60 Mbps currently.”