‘Cuba’s soundtrack to the world’ plan to disband

‘Cuba’s soundtrack to the world’ plan to disband 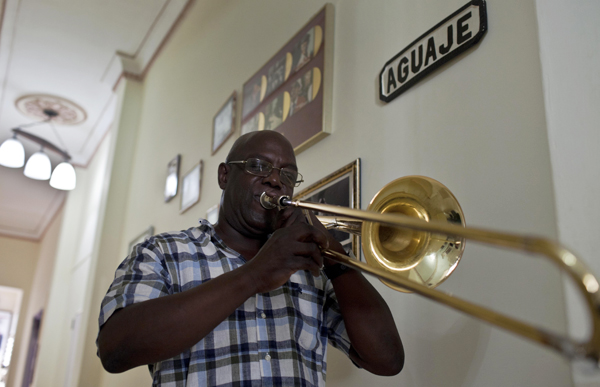 Jesus “Aguaje” Ramos, director and musician of the Cuban band Buena Vista Social Club poses for a picture at his home in Havana, Cuba, on June 17. After rocketing into the spotlight in the late 1990s, the Buena Vista Social Club became nothing less than Cuba’s soundtrack to the world. Nearly two decades later, the remaining members of the group are preparing to disband after one last farewell tour. [AP/NEWSIS]

HAVANA - They were forgotten masters of a long-ago sound, their faces deeply lined and their hands spotted with age.

Then, suddenly, at an age when many performers would be retired, the members of this old-school band found themselves playing in some of the most hallowed venues around the world, sharing stages with the likes of Sting and Shakira.

After rocketing into the spotlight in the late 1990s, the Buena Vista Social Club became nothing less than Cuba’s soundtrack to the world. Nearly two decades later, the remaining members of the group are preparing to break up after one last farewell tour.

“Many of the musicians have their own plans,” said a visibly emotional Jesus “Aguje” Ramos, a trombonist and orchestra leader who has been with the group since the beginning. “They must be given a chance.”

He spoke in an exclusive interview with The Associated Press before the group left Cuba last week for its globe-trotting swan song.

“The name of the tour is very strong - the ‘Adios Tour,’” Ramos said. “But for me it’s more of an ‘until next time.’ We are musicians, and we have to do this.”

The Buena Vista Social Club was born when U.S. musician and producer Ry Cooder traveled to the island in the 1990s and brought group members together to lay down their haunting 14-track album. The record won a Grammy, and a documentary of the same name was nominated for an Oscar.

The catchy opening chords of “Chan Chan” still echo through the cobblestone streets of Old Havana each day, played by roving bands of musicians who know what tourists want to hear. The group’s interpretation of classics like “El Cuarto de Tula” and “Dos Gardenias” are also frequently heard.

Together with a boom in other genres in the 1990s, the Buena Vista Social Club was a key part of a “great golden age of music in Cuba,” said Raul Fernandez, a social scientist at the University of California, Irvine, who studies the island’s music.

Today, many of the core original members have died, including Ruben Gonzalez, Ibrahim Ferrer and Compay Segundo, with crooner Omara Portuondo and guitarist Eliades Ochoa among the better-known still living.

Over the years, the group has always had a kind of revolving door for artists who came and went. But the central mission was always the same: to revive a musical tradition that had been shunted aside by new tastes.

“When we started, there were people who made fun of the music we made, danzon, cha-cha-cha,” Ramos said. “‘That’s out of style,’ they said. But still we have kept on going. It rescued all that history.”

Amadito Valdes, who has had a long career as a percussionist, recalled the highlights of his time with the group: performing in New York’s Carnegie Hall; Gonzalez’s visit to the United Nations; Segundo’s audience with Pope John Paul II at the Vatican.

The farewell tour is scheduled to kick off Wednesday with a performance in Poland, run through 2015 and wrap up with a concert in Havana. The group’s younger members see it as a transitional moment in their artistic lives.