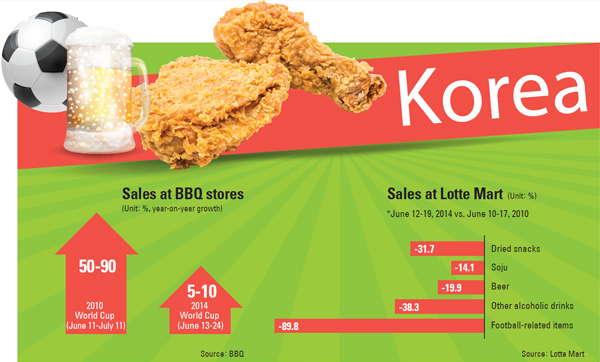 The high probability that Korea will be eliminated in the first round at the 2014 World Cup in Brazil is making local retailers sigh as expectations for high sales during the sporting event period are slipping away.

For Korea to make it to the Round of 16, it must beat Belgium by two or more goals, and Russia has to beat or tie Algeria. The game begins 5 a.m. Friday, Korea time.

The time difference between Korea and Brazil also has hampered retailers from benefiting from various promotions and marketing events.

From June 12 through last Thursday, alcoholic beverage sales at Lotte Mart were up only 10 percent from 2013. Also, sales of dried snacks like squid and fish increased 20.4 percent.

Although some Lotte Mart sales were up slightly, things were much worse compared to the same week during the 2010 World Cup in South Africa. Sales of dried snacks were down 31.7 percent from 2010, while sales of alcoholic drinks including soju and beer fell 16.3 percent.

Sales also have been disappointing at BBQ, a fried chicken chain. From the start of the World Cup on June 13 through yesterday, overall sales at its stores increased only 5 percent to 10 percent. During the World Cup in South Africa, sales were up as much as 90 percent.

“Back then, many of the games Korea played started at 8:30 p.m.,” said an official from BBQ. “The slight increase in sales this year is because of reruns of the Korean team playing on television and other countries playing at 1 a.m.”

Among retailers, convenience stores have been the biggest beneficiaries of the World Cup because they are open 24 hours a day.

And despite the early matches, many people went out and gathered near Gwanghwamun, central Seoul, and Coex, southern Seoul, to cheer the Korean team on June 18 against Russia and June 23 against Algeria. That also gave convenience stores a boost.

According to 7-Eleven, from midnight to 9 a.m. on Monday, sales nationwide jumped 30.9 percent compared to the previous year.

This surge is even higher than the 19.6 percent increase it saw when Korea battled to a 1-1 draw with Russia in its first match.

Retail officials note that more people came out to cheer for the Korean team in its second match, which it lost to Algeria, 4-2.

It remains to be seen, however, whether the crowd will return Friday when the national team plays group leader Belgium.

“It’s true that after Korea’s second match in which the team lost, the overall cheering sentiment has been affected,” said an official from 7-Eleven.

“But we are crossing our fingers that the street-cheering events will continue and many people, especially among football maniacs, will gather nevertheless for the third match this Friday.”

Hotels in the downtown Seoul area also are sighing.

“We had prepared various promotions for the World Cup,” said an official from the Plaza Hotel in central Seoul. “But in late April, with public sentiment being affected by the Sewol ferry tragedy, we canceled many of them.”

Normally, the occupancy rate at the Plaza Hotel gets a boost from people who make reservations for nights before and after events at City Hall Plaza, which is directly in front of the hotel. This year, however, the cheering venue has moved to the Gwanghwamun area because of a memorial altar for the victims of the ferry accident.

And the number of fans who came out to cheer for the Taegeuk Warriors was less than half of what it was in the past.

This year, about 40,000 fans gathered for the Korea-Algeria match. The official noted that food and beverage sales were also flat.

Meanwhile, concerns are mounting among retailers over the ongoing contraction in domestic spending. Many had hoped the 2014 World Cup would help turn things around, but that hasn’t happened.

Bank of Korea data showed that domestic spending in the first quarter increased 0.2 percent from the previous quarter, which is lower than the fourth quarter’s growth of 0.6 percent.

While consumption sentiment has subsided for months due to the bad economy, the disastrous Sewol ferry accident that killed nearly 300 people caused spending to slip even more.

“The sluggish economy has been continuing for a long period,” said an official from Lotte Mart. “It’s a very difficult year for us.”

According to Lotte Mart, total sales at its nationwide stores were down 2.8 percent in the first five months of this year compared to last year.

The year-on-year sales drop is even steeper - 4.1 percent - when excluding May, the month of many holidays including Children’s Day and Parent’s Day.

“The Korean team lost to Algeria on Monday,” the Lotte official said. “This is raising concerns that the retail industry will no longer have the possibility of benefiting from World Cup marketing and promotions.”