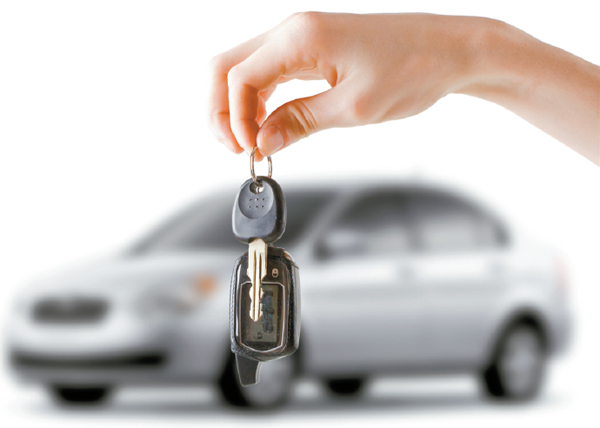 If you were a college student right now, what would you buy as your first car? Would your priority be fuel efficiency or design?

To answer these questions, Hyundai Mobis, the nation’s largest auto parts maker under Hyundai Motor Group, has been conducting nationwide surveys since 2012.

This year, 491 women and 605 men representing 18 universities answered the survey last month, and there were some notable shifts in preferences.

For the past two years, Hyundai Motor’s Avante (known as Elantra overseas) has been the students’ top pick for their first car, but the popular subcompact didn’t even make it into this year’s five.

Instead, Kia Motor’s multipurpose Soul, now in its second generation, was the most wanted car. Among imports, the third-generation Mini Cooper was No. 1, beating Volkswagen’s Golf.

If the Avante’s absence was surprising, what really raised eyebrows was the second-generation Hyundai Genesis luxury sedan, showing up in the No. 2 spot in domestic car rankings. Among the imports, the Audi A7, another large and expensive coupe, was No. 3.

This is the first time that large premium sedans made it into the top five when college students were asked what they wanted for their first car.

“Despite its large price and size, this is because their fresh and sleek design has appealed to even students who are in their early 20s,” said a spokesman from Hyundai Mobis.

However, this doesn’t mean college students have become less frugal. One in four said they consider fuel efficiency the most import factor when considering what car to buy.

This is a big change from the previous two surveys where design was chosen as the most important factor to consider by more than 30 percent of respondents.

“It seems that concerns about high gasoline prices and the rising attention given to environmentally friendly cars like electric vehicles and hybrids are reflected in the result,” the Hyundai Mobis spokesman said. 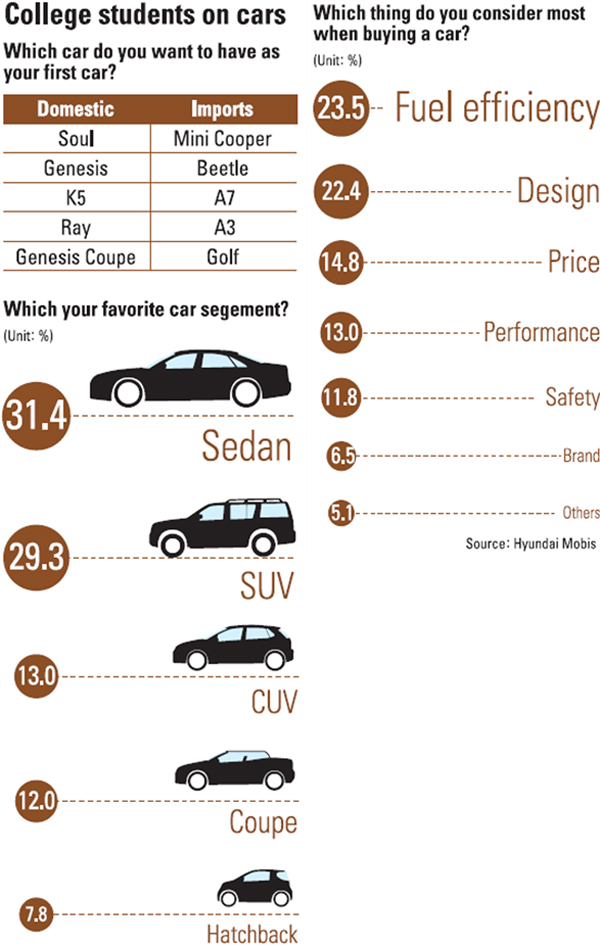 While men chose fuel efficiency, design and price as their top three purchase priorities, 29.3 percent of women cited design, followed by safety and fuel efficiency. Hyundai Mobis said the women were probably more affected by the Sewol ferry tragedy in April. The survey was conducted in May.

When deciding whether to buy a new or used car, 59.7 percent of survey participants chose new because there are more factors to consider when shopping for a pre-owned car. Among women, 68.4 percent said they would buy a new car.

In this year’s survey, only 5.5 percent of participants had their own cars, compared to 9.6 percent in 2012 and 6.9 percent in 2013. That suggests college students’ buying power is decreasing.

Only 8 percent of college students said they plan to purchase a car before graduation. This is also a step back from last year, when 12.5 percent planned to have their own vehicle in college.

However, even though college students’ purchasing power is not as strong as it used to be, the desire to have their own car is stronger than ever. This year, 46.4 percent of student said they want to own a car before a house, compared to only 34.3 percent last year.

More than 57 percent of college students who don’t own cars said they borrow their family or friends’ cars when they have to use one, while 24 percent go for rental cars.

Only 3.5 percent of them said they use car-sharing services, which are popular in the United States and Europe.