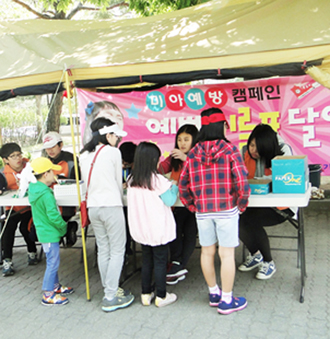 Kepco employees in Suwon hand out name tags and booklets to prevent children from going missing. Provided by Kepco

The Korea Electric Power Cooperation (Kepco), the nation’s power distributor, aims to build a safer society for Korea’s children. Since 1993, the company has worked to find missing children and prevent them from getting lost.

For almost 20 years, Kepco has been printing photos of three missing children on its electric bills each month. So far, it has helped to find 109 children. This April, the company has started to post photos on their customers’ mobile phone bills. Approximately 3.6 million bills containing photos of missing children are distributed nationwide. A separate part of the phone bill is dedicated to the photos and physical descriptions of the children to make them more noticeable.

On May 5, designated as Children’s Day in Korea, 1,200 employees from 147 offices volunteered to run a campaign to prevent children from getting lost. Volunteers handed out 73,000 name tags and 13,000 booklets to help prevent or find missing children in various locations, such as children’s parks or major festival areas.

The booklets are for recording a child’s basic information, such as physical attributes and photos. They also contain storage for DNA samples like hair. The booklets give directions to parents to help prevent them from losing their children and give instructions of what to do if their child becomes lost. The children participating in the campaign also got face paintings and balloons.