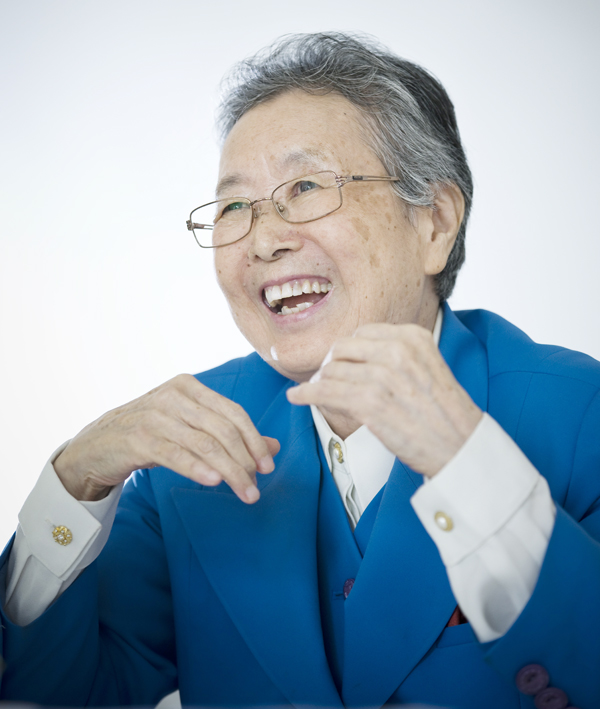 The scholar was over the age of 80, but she did not have a hair out of place. Her appearance was clean-cut and her voice was even, though she occasionally burst out laughing. The JoongAng Ilbo asked about her remaining wish.

“There is a high mountain in my hometown. When the two Koreas are unified, I would like to shout out to the world at the peak of the mountain, with my arms wide open, that we are one country,” said Yoon Hoo-jung, honorary president of Ewha Womans University.

“As the place was very windy, we also used to call it Punggosan,” said Yoon (pung means wind in Korean). “Since defecting to South Korea, I have never visited my hometown, but I clearly remember the scene of the town.

“I studied and played hard. I used to take an early morning bath in the river and eat berries in the mountains,” she recalled.

“The lyrics to the folk song ‘Shingosan Taryeong’ start with ‘ka-boom’ because there was a mountainous region between Shingosan and Seoul, and whenever any train had to pass through it, it had to stop at Shingosan to get resupplied with water to run the steam engine.”

The 82-year-old honorary president of Ewha Womans University is renowned as the first Korean scholar of constitutional law and an activist for women.

Yoon served as president of Ewha from 1990 until 1996. Now, she hopes to become the cornerstone of the unification movement.

Yoon is innately smart. During her time at Japanese elementary school, she said she decided to study hard and help others for the country and for its women.

Immediately after liberation, Yoon was brave enough to come to South Korea alone at the age of 14, leaving her parents in her hometown in the North.

Even during the days of evacuations to Busan during the 1950-53 Korean War, she did not stop reading books and later finished her studies in the United States through passion and commitment.

Since teaching at Ewha Womans University in 1958, she has been acting at the forefront of the women’s movement, including the abolition of gender discrimination.

Since she is part of our mothers and grandmothers’ generation, Yoon’s 80 years of life are a compressed file of Korea’s modern history.

A. I held onto this dream for a long time. I have always felt sad and heartbroken about the divided country. I was also sad about having been born in the colonial period, as we could not speak Korean at schools. We were taught to use Japanese as our first language and we were never allowed to put up Korean flags.

Then why do you start now?

I cannot do two things at once. Until now, I studied, taught students and committed myself to the women’s movement. Since I have resigned as chairwoman of Ewha Haktang, I can do what I have always dreamed of in my mind.

A billion won is quite a lot.

Including my years as a teacher’s assistant, I spent 55 years at Ewha Womans University. I’m only returning the salaries and the fees I received in the meantime.

It is a kind of contribution. I have been searching for what I could do to continue the unification movement and came up with the idea of holding an annual forum.

Was there any special motive?

It will soon be 70 years since the North and the South were divided. As the situation drags on, our cultures will also become divided. Women’s issues are also related to the separation.

Half of the national power is unused and there could be a larger tragedy than the Korean War in the future. I believe there is a need to promote unification issues more strongly.

Unification is one of the most difficult issues.

Of course it is. Also, there could be a variety of ways. On top of everything, contact and interactions between the two Koreas that have been severed must be reactivated.

If we only stick to political logic, the problem could become more difficult. I believe there are women’s roles to play. For instance, at the end of March, women of North Korea and South Korea met and held a discussion in Shenyang, China, about comfort women issues.

Whether it is about culture, education or sports, we need to meet and talk more often.

You must have been very mature to think about the good of the country when you were only in elementary school.

It was the times that made us mature. My parents both did farmwork all day and when they came home, my father was the only one who got to rest. My mom was not able to rest because of the chores.

I declared that I would not get married if I had to live that way. I also got to know the sorrow of a country without power, when my dad said our country was taken over because we were not able to prevent Japanese imperialism. I learned the details of it later as I grew up, though.

You defected to the South alone at the end of 1946.

I was selected as a North Korean special national scholarship student. They said they would even send me to Moscow after I graduated from Kim Il-sung University.

It was kind of a leader training course. However, I was born a Christian. Communism denies God, and I was afraid that I would suffer in the eternal fire of hell. Around 1948 and 1949, my parents also defected to the South.

You are Korea’s first female scholar of constitutional law.

When I told the Rev. Kang Won-ryong, a protestant minister who came to Ewha Girls’ High School as a lecturer before the Busan evacuation period ahead of my college entrance, that I would like to work for the country, he told me to study law.

If I had become a politician, I would have been a wreck by now.

You are regarded as a pioneer of women’s studies.

I approach women’s issues based on a human’s right to equality. Since the 1950s, I joined the Family Law Amendment movement.

I used to be slandered for harming patriarchal morality and traditions. Some said they would throw me into the Pacific Ocean.

I remember contributing to the stipulation of the provision “Marriage and family life shall be entered into and sustained on the basis of individual dignity and equality of the sexes, and the State shall do everything in its power to achieve that goal,” Article 36, Clause 1 of the Republic of Korea Constitution in 1980, the 8th Amendment. [The provision was] the most rewarding job I ever did.

Based on that clause, the patriarchal family system was ruled illegal in Constitutional Court in 2005.