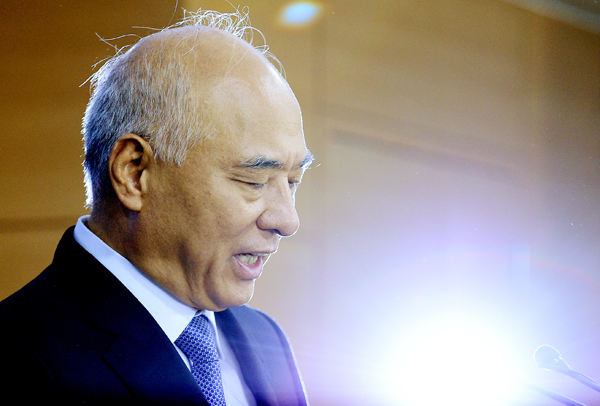 Moon Chang-keuk, the prime minister nominee, announces he will step down at a press conference yesterday in the Central Government Complex in Seoul. [NEWS1]

Moon Chang-keuk, the prime minister nominee, bowed out yesterday as the controversy surrounding comments he made about Korea’s colonial history has hardly abated in the two weeks since President Park Geun-hye tapped him to fill the post, despite his efforts to alleviate the backlash.

“[The president] brought me to this position and is also the one who can withdraw the nomination,” Moon said yesterday morning in a press conference at the government complex in Gwanghwamun, central Seoul. “I want to help President Park Geun-hye, and I’ve reached the conclusion that withdrawing at this point would.”

The outspoken nominee, who worked as a journalist for 37 years before his retirement in 2012, rapped out bitter comments directed at lawmakers and media outlets.

“When the president nominates a prime ministerial candidate, the National Assembly has the responsibility to hold a confirmation hearing in accordance with legislative procedure,” he said.

“And not just the opposition, but many ruling party lawmakers said I should step down, choosing instead to disregard sacred legal duty. When the National Assembly breaks a law it has established on its own, then who in the country will observe the law?”

He also lambasted his misrepresentation in the media.

Moon became mired in a nationwide dispute just a day after his nomination for prime minister on June 10 over comments he made in a 2011 speech at his church regarding Korean history. KBS aired only a fraction of his address in which he said that Japan’s colonization of Korea and the division of the Korean Peninsula were all part of “God’s plan.”

The main opposition New Politics Alliance Democracy (NPAD) went so far as to openly condemn him as a “pro-Japanese traitor.”

On Sunday, hundreds of his supporters across various fields, from academia to the media, issued a joint statement to demand that the National Assembly hold a confirmation hearing for him, but their efforts were to no avail.

Although the 67-year-old Moon announced in the conference yesterday that he was stepping down to support President Park - a decision that concluded his lone efforts to defend his previous statements that were aired by KBS, a state-run broadcasting station - he was practically swept away by the president’s lengthy silence.

The president postponed signing and submitting the motion to request a confirmation hearing to the National Assembly several times since she announced his nomination on June 10. Even after she came back from a six-day trip to Central Asia on Saturday, she offered no details whatsoever on the status of the nomination until Moon volunteered to abandon his post.

“The reason for holding a confirmation hearing at the National Assembly is so [the candidate] can be judged by the people by verifying the qualifications of the nominee through the occasion. And I think it is very shameful that [Moon] could not make it to the confirmation hearing,” the president said. “I intend to give [future nominees] a chance to explain any issues that have been wrongfully publicized so that they and their families won’t live the rest of their lives under disgrace.”

President Park’s persistent silence that pressed Moon to give up his nomination likely helped her avoid the worst-case scenario of seeing Moon fail to pass the confirmation hearing, which would have further undermined the ruling Saenuri Party’s already weakened standing ahead of the crucial July 30 by-elections.

To be approved, a nominee needs the consent of half the National Assembly, or at least 143 lawmakers.

The Saenuri commands the loyalty of 148 lawmakers, while the New Politics Alliance Democracy (NPAD) holds 126.

Moon’s decision to step down means that he is the third prime minister nominee tapped by the Blue House to abandon his nomination before going through a confirmation hearing - an unprecedented event that has the presidential office facing an uncertain situation.

Incumbent Prime Minister Chung Hong-won tendered his resignation on April 27, nine days after the Sewol ferry capsized in waters off the southwestern coast, saying he would assume all responsibility for the disaster. The disaster left nearly 300 people dead, mostly high school students who were on a class trip.

He is poised to step down once the crisis has been fully dealt with, though he has continued to carry out his prime ministerial duties in the absence of a successor.

Chung presided over the regular cabinet meeting yesterday morning on behalf of the president in the presence of other outgoing ministers, whose replacements have been nominated but not yet approved.

Park yesterday afternoon sent motions to appoint seven new ministers and a new chief of the National Intelligence Service, and to request their confirmation hearings at the Assembly.

It will likely take at least several days for the Blue House to find a third prime minister nominee following Moon’s decision to step down and the resignation of his predecessor, Ahn Dae-hee, and several weeks to have his or her qualifications assessed.

Ahn quit on May 28, six days after the media and opposition politicians accused him of making 1.6 billion won ($1.5 million) in just five months of practicing law after retiring from the Supreme Court in July 2012.

Kim withdrew after the media uncovered a series of allegations surrounding his wealth and his sons’ draft-dodging.

“Given that the third proposal for the prime minister should definitely succeed, widespread speculation is that a clean figure among politicians will be nominated,” a Saenuri official said.