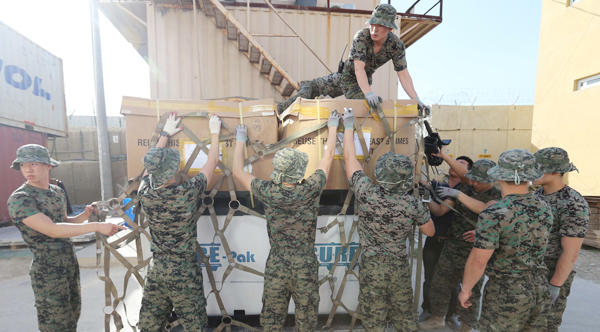 After four years, a joint team of Korean military and police officials and civilians successfully completed its reconstruction mission in Afghanistan on Monday, according to the Ministry of Foreign Affairs.

The Korean provisional reconstruction team (PRT) has been stationed in Parwan province in central Afghanistan since mid-2010 to help rebuild the war-torn nation, providing medical, vocational and police training as well as building facilities and infrastructure.

About 200 people attended the ceremony Monday marking the end of the team’s mission in Parwan, where one of the largest U.S. bases in Afghanistan, the Bagram air base, is located.

Hundreds of Korean diplomats, military officials, police officers, engineers and civilian experts have contributed over the years to these reconstruction efforts. They constructed schools and bridges and set up a vocational training center that has instructed some 500 youths and provided around 5,000 young girls and boys the chance at an education they would have otherwise missed. About 250 patients visit the Korean hospital every day.

“All the work and achievements of the Korean PRT will remain in the hearts of every Parwani and Afghani,” Parwan Province Governor Abdul Basir Salangi said at the ceremony. He also recalled the 2008 natural disaster in Salang District, adding: “The Korean Embassy promptly arrived here and delivered assistance to the people of Salang District.”

As the main country stationed in Parwan, Korea has also worked on numerous aid programs, including educational and agricultural development, and providing health care and local government administrative capacity-strengthening programs.

The Oshino Unit, which at one time was 350-strong but has been reduced in size over the years, is expected to return to Korea soon.

The Korean Bagram office will continue with the PRT’s projects and operate the Bagram Korean Hospital. Around 40 Korean civilians will continue to run the Vocational Training Center.

The training center has departments covering electronics, computers, autos, welding, plumbing and construction, enabling more than 400 of its students to have a chance at employment.

Faisal Safi, a 24-year-old electrician, began taking lessons at the training center in 2010. He currently teaches other aspiring electricians there.

“My life has completely changed in the four or five years that I have been here,” he said. “I can support my own family because I really studied hard here.”