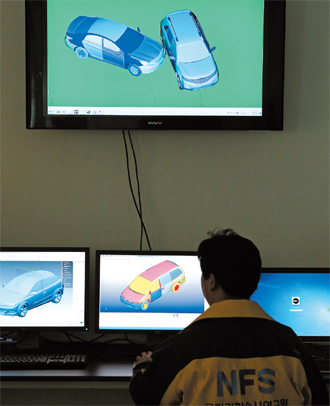 Choi Ji-hoon, a researcher at the National Forensic Center in Wonju, Gangwon, reruns a car accident on a screen. The data calculated from the simulation will be entered into MADYMO to measure the impact the driver endured during the collision. By Choi Jeong-dong

Earlier this year, Mr. Park was driving in Nonhyeon-dong, in Seoul’s Gangnam District, when his vehicle collided with an oncoming taxi. It was a minor accident that only resulted a few dents and scratches on the cab’s bumper, and neither party sustained injuries. Because Park was at fault, he gave his name card to the taxi driver and told him to get in touch once he received a quote for the cost of repairs.

The driver appeared fine and they agreed without incident.

But the next morning, the cabbie had a different story. He called Park and complained that he was experiencing pain in his neck, waist and shoulder, and asked for compensation and money for the doctor’s consultation fee. He also noted that his passenger had been suffering from neck pain.

Park could not recall there having been a passenger.

So he called up his friend, a police officer, to discuss the matter, who advised Park to tell the taxi driver that he would officially report the case to the authorities and request a crash and safety analysis.

The taxi driver was annoyed by the idea at first, and said that he wouldn’t bother Park again if he agreed to compensate him 600,000 won ($586). And after a few more calls, the negotiation was finally settled at 300,000 won.

As it turns out, Park was among an increasing number of Koreans who have fallen victim to car insurance fraud, in which a party typically exaggerates pain or injury from an accident to receive more compensation from an insurance company or those involved in the collision. The worse the injury, the more the scammer gets paid.

In Park’s case, the taxi driver fabricated his injuries and even lied about having a passenger in the vehicle to turn a profit.

But now, there’s more that can be done in these types of situations, and an analytical software program known as MADYMO - short for Mathematical Dynamic Models - has slowly become one of the most reliable solutions for determining the extent of car accidents and exposing insurance fraud, leading officials to consider changing the way they handle investigations altogether. 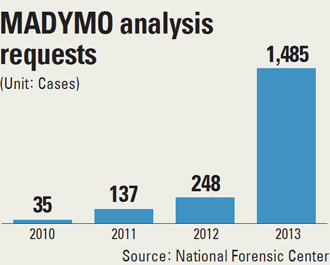 MADYMO is a computer modeling software that can mathematically determine the likely injuries sustained by a passenger during a crash by taking into account velocity, impact and other given variables.

The results of the analysis can also prove whether a victim’s statement regarding his or her physical condition is realistic. The program calculates the impact the victim may have likely endured during the collision and then measures the possible extent of injury based on that information.

Without this program, those at fault run the risk of being unfairly charged or legally reprimanded, providing more compensation money than is necessary, especially if the victim’s statement is grossly exaggerated. Complicating matters is that some hospitals are also actively participating in accident fraud, with some doctors fabricating fake diagnoses and faking treatment certificates for a share of the perpetrator’s compensation.

According to the Health and Welfare Committee, the number of hospitals that have participated in these crimes has increased six-fold in just three years.

This method puts hospital documents on record in case of legal action, and allows the scammer to easily obtain more money from the party at fault or exaggerate the insurance claim.

MADYMO, developed by the Netherlands Organization for Applied Scientific Research (TNO), provides a worldwide standard in determining an occupant’s safety following a car accident and accurately estimates the extent and location of injury in all possible scenarios.

Each test differed in speed, velocity and even car model, and included every possible scenario - head-on collisions, broad-side collisions and back-side collisions, among others. Researchers also accounted for the size of each vehicle and performed crash tests between cars and pedestrians.

By collecting data through thousands of experiments, TNO was able to calculate the “minimum impulse” that a passenger or pedestrian with a particular physical build might sustain in car accidents of varying degrees.

With these simulations, MADYMO can measure the degree and location of impact on the victim’s body in an accident situation when his or her physical information is given. The program can also figure out whether the impact even caused injury at all.

MADYMO analyses on the rise

In Korea, the National Forensic Service (NFS) and Road Traffic Authority both possess the MADYMO software. The forensic service first used MADYMO in 2009 to analyze traffic accidents, though at the time it was only used to shed light on accidents in which the victim’s cause of death was not initially clear, said Choi Ji-hoon, the chief of the traffic engineering division in the NFS.

But even that was not enough to grab public attention, and the software was only used in 10 cases in 2010.

But as insurance and accident fraud has increased, so too have requests for MADYMO analysis, specifically when it comes to expanding investigations.

Since 2010, requests have risen drastically. There were about 1,485 cases last year, and significantly more than that this year before June. And as black box users have increased, more people have requested video analysis to ensure they are fairly charged, according to the National Police Agency.

But MADYMO is not always used for investigation in cases in which the program is requested.

“Only 20 percent of [those cases] are analyzed with MADYMO,” said Choi. “The rest are judged by comparing the case with similar accidents or by using other kinds of analysis programs.”

Still, more disputes over accidents have been settled through MADYMO analysis in the past few years alone.

When a request comes in for an accident to be analyzed, the traffic engineering division in the NFS makes a simulation that reruns the accident in order to collect data. These numbers are then entered into MADYMO to determine the final results.

Since preliminary work takes up a lot of time, no more than four cases have been solved in a single day.

How to judge those at fault

MADYMO is also changing the way investigation agencies treat those at fault in accidents. Currently, all suspects at fault, even those with full insurance coverage, are arrested if the victim is diagnosed with an injury that lasts at least two weeks.

As a result, about 100 people in Incheon have served jailed time. Most parties tend to settle out of court to avoid prison, which scammers capitalize on by requesting outrageous sums in compensation.

After analyzing 70 minor auto accidents in which victims claimed they had sustained injuries that persisted for two weeks or more, Incheon prosecutors discovered through MADYMO analysis that about 10 of them had hardly resulted in any damage.

The results proved that punishing those at fault based on medical certificates alone was unfair. For this reason, the Incheon District Prosecutors’ Office recently invited members of the NFS to discuss changes to be made to the current judicial process.

For scammers going after insurance money, MADYMO has become a severe nuisance, and in some instances the program’s analysis has helped to reverse false claims and secure justice.

Some insurance companies denied compensation to fraudulent victims once the case was reexamined using MADYMO. And some requested the money be refunded and even brought civil suits against those who refused to pay back what they had swindled.

Still, while MADYMO is useful and has helped shed light on a multitude of accidents, it shouldn’t be considered the ultimate authority, officials say, as it doesn’t apply to every case.

Some accident victims have even complained, claiming that insurance companies will deny compensation for legitimate injuries based solely on the authority of MADYMO results, even if the damage done cannot be quantitatively measured.

“MADYMO is only one of the standards used to measure the possibility of injury,” said Ho Guk-jin, from the National Police Agency, “not a definite answer in concluding a case.”