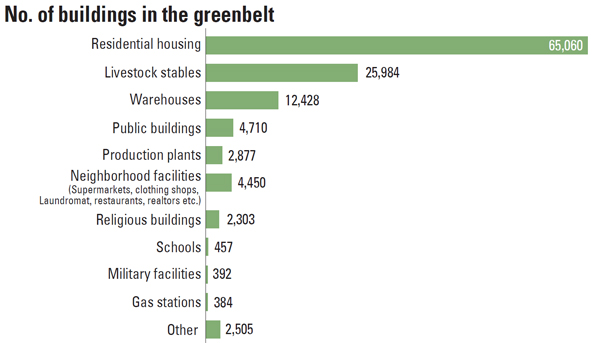 A restaurateur who owns a business in a restricted development area near Seoul has been hoping to convert his ailing establishment into a museum displaying handicrafts that he has collected throughout his life, but the local government and the Land Ministry flatly refused to allow it.

Another resident in the restricted area was also denied when he requested permission to change his struggling guesthouse into an elderly care facility.

These examples are part of numerous inconveniences that residents living within the development-restricted area, also known as the greenbelt, have faced since the government created the zone in 1971.

The Ministry of Land, Infrastructure and Transport said yesterday it would lift bans that have prevented residents from opening new businesses such as museums, welfare facilities and public bath houses. The aim is to improve living conditions of the residents within the heavily regulated greenbelt by permitting a wider variety of income sources.

The Land Ministry said that it has expanded the types of businesses that could be established within the greenbelt from the previous 30 to 90.

“We expect roughly 60 percent or 72,000 buildings out of the total 120,000 located within the greenbelt to benefit from the change,” said a Land Ministry official. “We have had a lot of requests [from residents] asking to change their businesses to a museum or welfare facility [including nursing homes].”

Permissible new businesses exclude livestock stables, greenhouses, warehouses and education facilities because they are already scheduled to be built in the greenbelt. Yesterday’s deregulation is only meant to allow existing businesses to change course if their current plan is failing.

However, it is possible that builders could manipulate the law by constructing new buildings within the greenbelt, originally listing them as livestock stables or greenhouses, and then converting to another business once construction is finished, which could lead to reckless development.

Some of the changes proposed by the government are to improve the quality of living of residents in regulated zones.

The deregulations will also allow buildings to be made into community areas, such as child-care centers, public libraries or entertainment facilities such as play houses, small movie theaters and sport facilities such as tennis courts and driving ranges.

Any new entertainment or sporting spaces must be less than 500 square meters (5,381 square feet).

The government plans to implement the new changes in December.