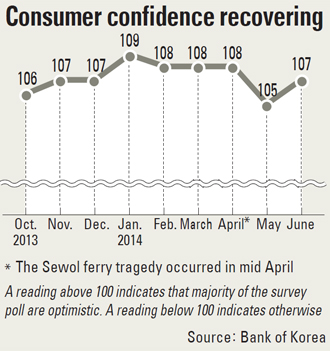 Korea’s key measure of consumer sentiment rose in June after a modest fall the previous month, a central bank survey showed yesterday, increasing hopes that recovery in domestic consumption is back on track.

The Bank of Korea said its composite consumer sentiment index rose to 107 in June from 105 in May. The index had slipped in May after staying at 108 for three straight months.

The decline in May was blamed on the Sewol ferry sinking that killed more than 300 people. After the tragedy, retail and travel sales softened.

The index’s 2.3 point improvement in June, however, fell short of making up May’s 3.6 point drop.

A reading above 100 means consumers who expect economic and living conditions to improve in the coming month outnumber those who expect them to deteriorate.

At 79, the sub-index for sentiment towards the current economy, which asks respondents to compare current economic situations from six months before, was a little better than May’s 76, but still way off the 91 recorded in April.

Sentiment toward the economy six months from June fared better, however, rising to 98 this month from 94 in May. The sub-index hit a 42-month high in March with a reading of 102.

The Bank of Korea also said Koreans’ median inflation expectation for the next 12 months remained unchanged at 2.8 percent in June from the previous month.

A majority of survey respondents said public utility prices were expected to pressure prices the most over the next 12 months, followed by industrial goods and housing.

The survey results precede June inflation data, which is expected to accelerate from a 19-month high annual rate of 1.7 percent in May.