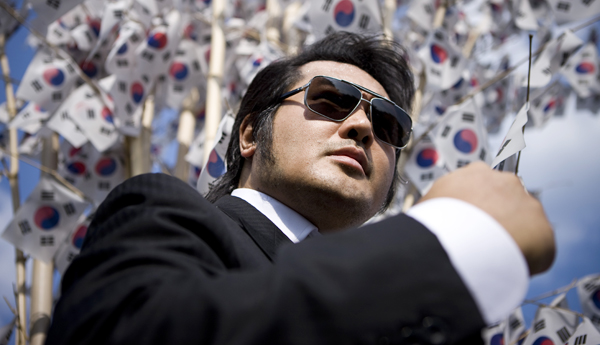 Kim Bo-sung clenches one fist, which is the gesture he makes when he shouts “uiri” in his commercial. By Kwon Hyeok-jae

A Birak Sikhye commercial shows a buff man in a suit smashing open a straw rice sack as he yells in a typical tough-guy voice, “Uiri for our health!”

Uiri is a Korean word to describe being loyal and faithful to others, while Birak Sikhye is a rice drink made by Paldo.

The clip, which features deadpan humor, quickly went viral. The video on YouTube recorded 2.97 million views as of yesterday, and many parody versions have followed.

Even Hollywood star Tom Cruise shouted “uiri” at the request of a Korean reporter he met in Paris late last month to express his gratitude toward Korean fans for the popularity of his movie “Edge of Tomorrow.”

Paldo said the beverage’s monthly sales increased more than 40 percent after the ad was released.

The man clad in the black suit is Kim Bo-sung. He made his film debut in 1989 with the movie “Happiness Does Not Come in Grades.”

In the ’90s he was in his prime with the “Two Cops” series and secured his reputation as an action star. In 2003 he took on a role as a doctor in “The Last Supper” to break his casting stereotype, but the movie wasn’t a hit and put Kim’s career in crisis.

Now, Kim is facing his second golden age because of the trending commercial, so the JoongAng Ilbo decided to meet him to find out more about the actor.

Kim wasn’t careless in picking an interview spot. He insisted on meeting at the Seoul National Cemetery in Dongjak-dong, southern Seoul, to honor Memorial Day (June 6). Citizens who had come to pay their respects surrounded him and shouted “uiri.”

Dressed in a black suit and a tie, Kim was sweating buckets under the scorching sun, but he didn’t seem to mind. Afterward, we went to the nearby Bangbae-dong street cafe to talk.

Q. Your commercial is the talk of the town. How does it feel?

A. I thought that was something of a miracle. I was quite serious while filming it but later saw how comedic it looked. No wonder they were using a high-speed camera.

After that, dozens of commercial requests came in, but I don’t want to harass the word uiri so I’m making careful selections.

It’s actually funny because you are so serious in the commercial. Was it intended?

I didn’t mean it to be funny, but a lot of people found it amusing [laughs]. What can I do? I was born that way. Some see my sincerity toward uiri as a bluff, but I hurt my right eye in high school fighting against 13 people to protect the weak [Kim is currently classified as profoundly visually impaired]. It seems like a lot of people wonder if I really did that, but I really did.

You went through surgery without anesthesia as a means of “self-reflection” when you ripped the rim of your eye while waving a nunchuck around during a TV show recording. You also borrowed 10 million won ($9,797) from the bank to donate to the victims of the Sewol ferry disaster, even after losing your fortune through a stock investment. It seems like you live your life like you’re in a play. Do you agree? 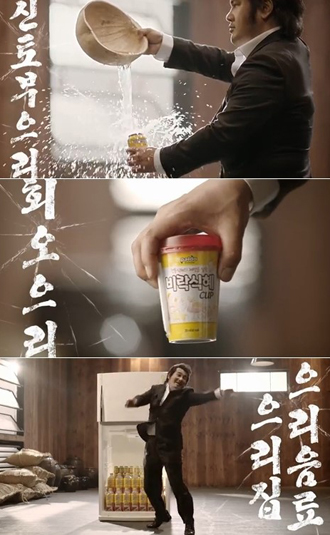 I like that kind of expression. In a poem I wrote there’s a line that reads, “live like a movie star and emerge from the screen sometimes.” There’s actually a childlike side of me that gets excited and overreacts when someone says I’m doing a good job.

But that doesn’t mean I intentionally push uiri with a character that I made up. Even as a kid I solved all the problems when the weak were bullied, and that’s happened thousands of times.

Don’t you think the idea of uiri could be abused?

That’s why I say there should be justice for the public interest. The lack of it creates a phenomenon like gwanfia [a portmanteau of the Korean word for bureaucrat and the word mafia, which means the perennial collusion between government officials and businessmen who have ties from going to school together or regional ties].

Regionalism and school ties don’t show what real uiri is because the basis for uiri is justice.

In 2012, an investigation revealed that your name was being used for a company affiliated with violence. How were you involved in this?

The truth is I wasn’t involved. In 2009 my manager asked if his acquaintance could use my face for a security service company. I said OK because I thought it was for the security industry. It seemed like the right thing to do as bodyguards help the weak. There was no contract and no exchange of payment. After a month I visited the website to discover myself listed as the honorary president. The company confirmed in a police investigation in 2012 [that I didn’t know]. We got the information and photo taken down immediately, but the issue resurfaced after three years.

Is there something you’re scared of?

Chickens gross me out. I don’t even eat fried chicken. When I was six my mom brought in a fortune teller who threw a chicken around and the way it flapped its wings was repulsive. I’ve had this trauma since then.