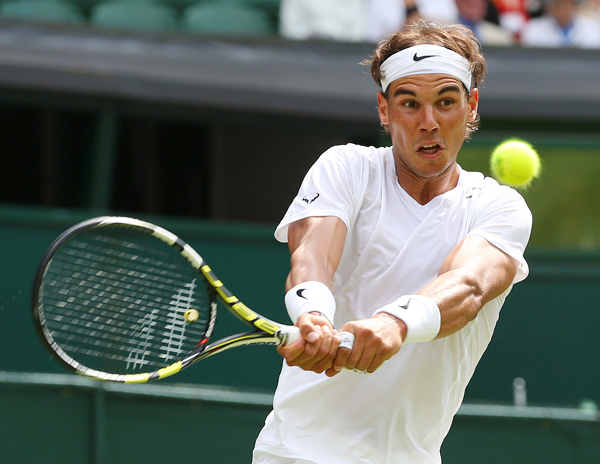 Rafael Nadal of Spain delivers a backhand return to Martin Klizan of Slovakia during their match Tuesday at the All England Lawn Tennis Championships in Wimbledon. [AP/NEWSIS]

For a set and a half, Rafael Nadal looked in danger of losing in the first round of Wimbledon for the second year in a row. The left-hander dominating play on Centre Court was not the 14-time Grand Slam champion; it was 51st-ranked Martin Klizan of Slovakia.

“That means that I had a very long and successful career, so I’m happy for that,’’ Nadal said. “But the most important thing for me today, more than 700 victories, is a victory here in the first round.’’

Next up for the two-time Wimbledon champion: Lukas Rosol, the hard-hitting Czech player who eliminated him in the same round two years ago.

“He’s a very dangerous player, very strong, very powerful shots from the baseline,” Nadal said. “I have to play very well if I want to have chances to win.’’

While Nadal had to battle Tuesday, seven-time champion Roger Federer strolled to a 6-1, 6-1, 6-3 victory over Paolo Lorenzi, an Italian with a career 0-13 record in Grand Slam matches.

Among other straight-set winners on a sunny day at the All England Club were Australian Open champion Stan Wawrinka and French Open winner Maria Sharapova.

Tuesday’s victory was Nadal’s first win on grass in two years. He was upset by Steve Darcis in the first round here last year and lost to 85th-ranked Dustin Brown in a Wimbledon tuneup in Halle, Germany, two weeks ago.

Klizan, who has yet to reach the second round at Wimbledon, went toe to toe with Nadal from the baseline with his big-swinging forehand. He nearly matched Nadal for winners (36-35 for the Spaniard) and served 11 aces, two more than Nadal.

But Nadal converted eight of 15 break points, while Klizan was only three for 13.

After Klizan took the first set, he had a great chance to go up an early break at 1-1 in the second. But Nadal saved three break points, including the third with an ace, and held to begin a run where he won eight of 10 games. He broke for the first time to go up 4-2 in the second set.

Nadal broke to open the third set, a game which featured a spectacular 14-stroke rally. Nadal slipped and fell while chasing a shot in his backhand corner, scrambled back to his feet and sprinted from side to side before winning the point with a cross-court backhand.

Nadal was at his acrobatic best again in the third game of the fourth set, tumbling to the grass while hitting a forehand at the baseline, rolling over, getting up and hitting a backhand topspin lob for a winner.

In a mismatch on Court 1, Sharapova sailed to a 6-1, 6-0 win over British wild-card entry Samantha Murray, who ranks 242 places below the Russian at No. 247.

The fifth-seeded Sharapova, who lost here in the second round last year to Portuguese qualifier Michelle Larcher de Brito, is bidding for her second Wimbledon title a decade after winning her first as a 17-year-old.