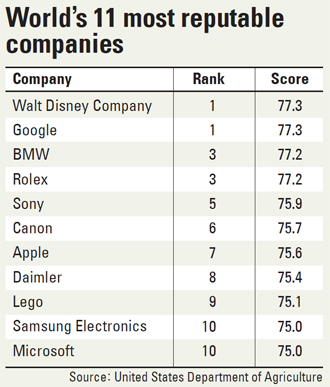 Samsung Electronics shared honors with Microsoft as the 10th most reputable companies in the world, a U.S. survey showed.

Forbes, citing a 2014 Reputation Study by the Reputation Institute, said on Tuesday that Samsung tied with the Windows operating system developer. The top spot was also shared by Walt Disney and Google. Samsung’s smartphone archrival Apple came in seventh place.

It is the first time the Korean tech giant made it onto the institute’s top 10 list. Samsung jumped 33 places in three years, an improvement no other company can match, the Reputation Institute said. Samsung, which was placed 196th in 2008, rose to 43rd in 2011, to 21st in 2012 and to 16th last year.

“They are now in the same tier as rivals Sony and Apple when it comes to trust and respect from consumers,” it said. Sony was ranked No. 5.

In addition to overall scores and rankings, the survey also measured corporate reputations region by region, and Samsung actually hit No. 2 in Europe.

“It is fantastic to receive this recognition from our customers and wider stakeholders,” said Greg Dawson, Samsung’s European Communications Director, in a Reputation Institute release. “Samsung’s purpose is to innovate for customers all over the world, so the communications team is merely trying to open channels to communicate this philosophy.

“We are naturally pleased with our progress but recognize that reputation must continue to be earned every day.”

According to the Reputation Institute, a survey was conducted on 59,921 consumers in 15 major economies in January and February. Korea was one of the countries, as were the United States, China, Japan, Germany, the United Kingdom and France. The reputation of a company was measured based on answers to questions such as whether a person would be willing to buy a product or be employed by the company.

The other Korean company within the top 100 places was LG Corporation, which finished 64th in this year’s reputation survey, a one-notch drop from last year.

According to the institute, advertising was not very effective in building corporate reputation. Only 25 percent of consumers around the world trust what companies say in their advertising, it said.

“Successful companies have changed their marketing approach to focus more on building trust in the company rather than pushing their product alone,” said Kasper Ulf Nielsen, an executive of Reputation Institute.

“They are doing it in a myriad of ways, from social media engagement to co-creation programs with customers .?.?. The companies who are doing this right save money and get better results.”