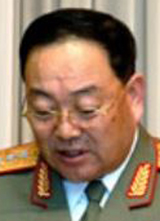 North Korea has appointed a former chief of the general staff of the Army as its new defense minister, just a year after it named his predecessor.

The official Korean Central News Agency (KCNA) yesterday introduced Hyon Yong-chol, a four-star general who was the former chief of the general staff between July 2012 and May 2013, as the Minister of People’s Armed Forces, which is equivalent to South Korea’s Ministry of Defense.

According to the South Korean government’s database, Hyon, 65, was born in North Hamgyong Province and worked as the commander of the 8th Corps of the North Korean Army, in charge of security in the northwestern border region with China.

He was once regarded as a rising military star in the regime when he was named the chief of the general staff of the army in July 2012 and promoted to Vice Marshal, the second-highest rank in the North Korean military after leader Kim Jong-un.

However, just months after his promotion, in October 2012, he was downgraded to a four-star general.

He was subsequently dismissed from his post as the chief of the general staff in May 2013, and replaced by Kim Kyok-sik, a hawkish four-star general who allegedly directed the deadly shelling on South Korea’s Yeonpyeong Island and the sinking of the Cheonan naval ship in 2010.

Details on Hyon’s whereabouts afterward were not reported by state media.

However, he was recently seen at a guard post of the North Korean Army’s 5th Corps in Kangwon Province, North Korea, accompanying Kim Jong-un, who made a field guidance trip to visit the corps with other officials.

Seoul analysts assumed he could be the commander of the corps.

Hyon was also assumed to have been retired when Pyongyang released its list of newly elected delegates after its rubber-stamp Supreme People’s Assembly in March. At the time, he was not on the list.

Under Kim’s rule, four defense ministers have so far been replaced.

In April 2012, Kim Yong-chun, an aging high-profile military veteran who had served in the post since Kim Jong-il’s rein, was replaced with Kim Jong-gak, another close aide to Kim Jong-il who guarded the late leader’s hearse during the funeral.

Kim Jong-gak was replaced after just seven months, however, by Kim Kyok-sik, the hawkish military general, in November 2012.

He also kept his post for only six months until Jang Jong-nam, a relatively young military general in his 50s, was placed in the seat.

Jang was then replaced after just 13 months by Hyon.