Sergeant’s suicide note will not be made public

Sergeant’s suicide note will not be made public 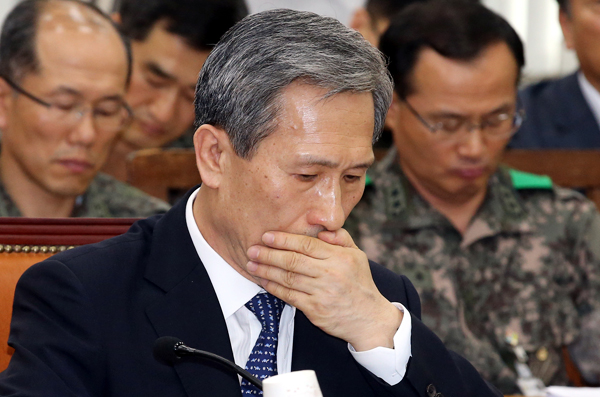 Kim Kwan-jin, chief of the National Security Office, is grilled yesterday at a National Assembly hearing on the shooting spree. [NEWSIS]

The Ministry of National Defense will not disclose the contents of a suicide note scribbled by an Army sergeant just minutes before he shot himself in the chest in an unsuccessful suicide attempt because of “strong opposition” from relatives of the soldiers he killed and wounded in a shooting spree last Saturday.

Defense Ministry spokesman Kim Min-seok said yesterday family members of the five soldiers killed and seven wounded in a rampage by the sergeant, identified as his surname Lim, are against making the suicide note public. The relatives are worried that the victims may be portrayed as having brought on their own deaths by bullying or otherwise alienating the 22-year-old soldier.

“While we can’t confirm whether the families have read the note, we decided not to reveal its contents,” said the spokesman.

The relatives’ concerns stem from two previous shooting sprees at military units in 2011 and 2005. In both cases, the shooters told interrogators that they were isolated from other soldiers and suffered in the strict, hierarchical military culture.

“Relatives of the victims in previous rampages went through an agonizing time because it came to be felt that victims were to be blamed,” the spokesman said. “The families [of the 12 victims] are in the same situation now.”

Local media has reported that Lim detailed in his note how he was ignored by his fellow soldiers, including lower-ranked soldiers, and had difficulty fitting in. The military refuted those reports on Monday.

But some media outlets reported yesterday that Lim wrote that anyone would have done the same had they been forced into his situation, citing unnamed Defense Ministry officials. The authenticity of that sentiment has not been confirmed.

Authorities are wondering why Lim, who joined the Army in December 2012, committed such a brutal act against his fellow soldiers when he had less than three months to go before he would be discharged on Sept. 16. He had served and lived with his victims for more than a year.

It was also revealed that Lim’s outpost in Goseong County, Gangwon, had its chief officer, a second lieutenant, dismissed in April due to poor management and loss of surveillance devices, according to the spokesman. Since the dismissal, a first lieutenant has been in charge of Lim’s unit on a temporary basis.

The revelation prompted speculation that the replacement of the commanding officer might have played a role in making life more difficult for Lim.

“It’s not a stretch to think it’s relevant given the fact that Lim carried out his rampage two months after the arrival of the new chief officer when he had not caused trouble while with the dismissed second lieutenant,” a military officer told the JoongAng Ilbo yesterday on condition of anonymity.

A funeral ceremony for the five soldiers who were killed will take place at 10:00 a.m. tomorrow and their remains will be buried at Daejeon National Cemetery.

While the Defense Ministry denied that Lim wrote he had been ignored or bullied by other soldiers in his suicide note, Defense Minister Kim Kwan-jin, who also serves as the president’s national security adviser, left open the possibility that the young solder might have had difficulty fitting in with other soldiers in a front-line outpost.

“Of many reasons that could have led to the rampage, it could have been exclusion by the group,” the outgoing minister told lawmakers at a special inquiry.