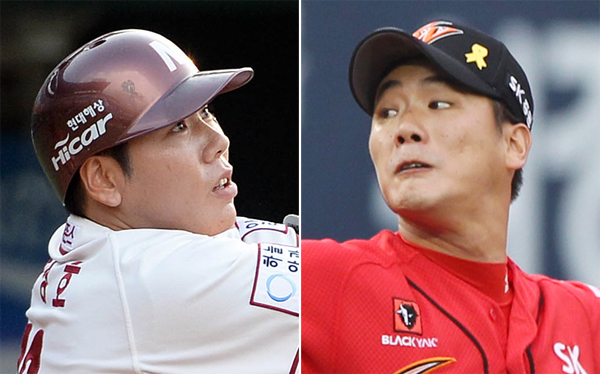 The game between the SK Wyverns and Nexen Heroes on June 20 at Mokdong Stadium in western Seoul was interesting not only because one of the Korean Baseball Organization’s top starting pitchers, Kim Kwang-hyun of the Wyverns, was facing two of the league’s best hitters, Kang Jung-ho and Park Byung-ho.

“It was a good chance for us to see Kang and Kim face each other because they have been on the MLB’s radar lately,” said one scout, who requested anonymity. “We also wanted to see how Kim pitched in the KBO’s most hitter-friendly ballpark.”

As of Thursday, the Heroes’ .295 team batting average was third in the league, and first baseman Park (.315 batting average) leads the league with 27 home runs. Kang, his teammate, has 21 home runs and is hitting .312.

Scouts interested in Kim had to have liked what they saw. Against the Wyverns’ ace, Park was 0 for 3 with two strikeouts and Kang was 0 for 2 with a walk.

Kim’s fastball-slider combination was good enough for a quality start, as he allowed two runs in six innings. His fastball topped at 149 kilometers per hour (92.6 miles per hour) and his league-best slider was painting the corners and fooling hitters. He struck out eight in six innings, while allowing five hits, including a two-run homer.

“It was impressive that he was able to throw pitches on the inside corner in a small ballpark like this,” another scout said. “His location was good, and his sliders were sharp.”

If he is a member of the national team for the Asian Games, he will become a free agent.

Interested MLB clubs would have to go through the posting system, and Japanese clubs would need to pay the Wyverns a transfer fee.

“Since former Kia Tigers ace Yoon Suk-min struggled in the minor leagues, there must be some concerns about Kim,” said analyst Kim Jung-jun. “But I think Kim will be better than Yoon because he doesn’t have any health issues like Yoon had [shoulder], and he is a lefty. There must be teams considering Kim as a reliever, even though Kim wants to be a full-time starter.”

While Kang wasn’t impressive in this game, he got another chance two days later under the eyes of scouts from the D-Backs, Padres, Nationals and Hanshin Tigers of Japan.

In the bottom of the fourth with the Wyverns ahead 4-1, Kang blasted a solo homer off Wyverns starter Ross Wolf and played solid defense, completing a double play by tagging the runner Na Joo-hwan and making a clean throw to first after fielding a difficult ground ball hit by Lee Myung-ki.

Kang played third base in the 2010 Guangzhou Asian Games, in which Korea won the gold medal, and was the national team’s hottest hitter, going eight for 13 with three home runs.

Sources say several Japanese teams, including the Tigers and Yokohama DeNA BayStars, are monitoring Kang. When Kang joined the BayStars’ spring camp as an invitee, many Japanese club scouts followed him everywhere he went.

“I think the big-ball MLB style looks more suitable for Kang,” said analyst Sohn Hyuk. “I heard that teams seeking Kang might ask him to play third base, and I think that would be good for him because he could focus more on hitting. He can produce more than 20 home runs in a season with a batting average between .280 and .290 in the big leagues.”

Choi Jung, the third baseman of the Wyverns who is currently sidelined with an injury, is another KBO star attracting foreign scouts. Over the past four seasons he hit .306 with 94 homers.