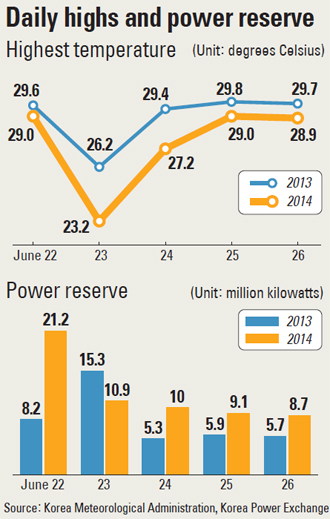 The government decided to completely lift its limit on air-conditioning at businesses and big office buildings for the summer and also eased the temperature limit for public organizations from 28 degrees Celsius to 26 (82 degrees Fahrenheit to 78).

The decision was made largely due to an abundant supply of power from an increased amount of nuclear reactors and the state-run weather agency’s prediction that this summer will be slightly cooler than last year.

The Ministry of Trade, Industry and Energy yesterday announced its summer power supply plan at the Central Government Complex in Seoul after it was approved by the National Policy Mediation Council. The plan will stay in effect until August 20.

Chae said that the Korea Meteorological Administration expect the average August temperatures to be 25.2 degrees Celsius, about 2.2 degrees lower than last year.

The ministry said that the air-conditioning limit can be safely dropped because more power generators are running.

Nine new power plants, including LNG and thermal, have opened since last summer, creating an extra 4.3 million kilowatts of power.

Of the country’s total 23 local nuclear power plants, 21 are currently operating, producing about 8.5 kilowatts for the national power reserve. That is expected to help maintain power reserves of about five million kilowatts as temperatures peak in August.

Only 16 nuclear power plants were in operation last year and three of those were shut down in the summer after it was revealed that the Korea Hydro and Nuclear Power Corporation used faulty parts while building the plants.

Despite dropping the regulations, the ministry recommends that buildings that use more than 100 kilowatts of energy per month maintain temperature of no less than 26 degrees during state-designated peak hours - from 10 a.m. to noon and 5 p.m. to 8 p.m.

However, the ministry said it will still impose fines of up to 3 million won ($2,952) for stores that keep air-conditioners on while leaving their doors open, which takes effect July 7. A first offense will result in a warning, but businesses will be fined 500,000 won the second time and the fee will be doubled for each offense until it reaches the 3 million won ceiling.

For businesses, summer seasonal sales will be better than last year, when their sales suffered from a regulation that imposed fines on stores that were cooler than 26 degrees.

Government organizations are obligated to keep the 28 degrees limit, but at least 20,000 government institutions, which get more than 60 percent of their power from an independent source of electricity, are allowed to keep their temperatures at 26 degrees.

Only a few public institutions that get air-conditioning from central cooling system, such as the Central Government Complex in Seoul, will have to deal with 28 degree heat.