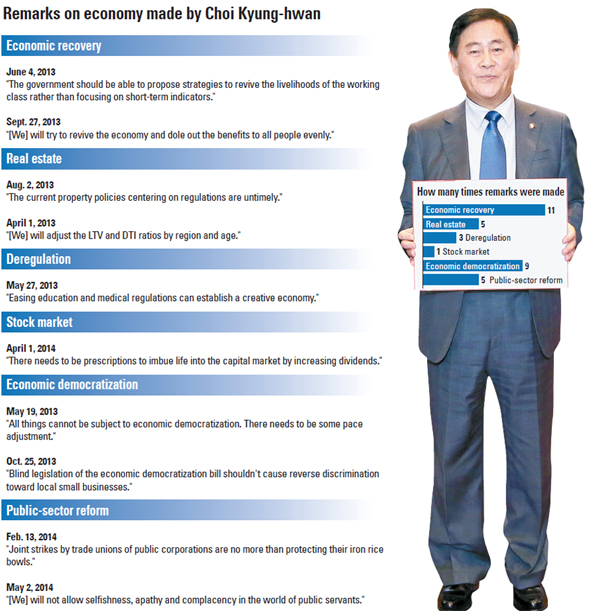 Since Choi Kyung-hwan was nominated for the double post of deputy prime minister for the economy and finance minister, there has been a lot of tea-leaf reading to see what he may focus on as new economic czar.

The JoongAng Ilbo has parsed all remarks made by the three-term lawmaker in the past year to foresee the direction of the country’s economic policies. It found that deregulating the property market would be a key focus of Choi to revitalize the economy.

According to the analysis, the most likely quotation expected from Choi at his confirmation hearings at the National Assembly is: “Including the real estate market, [we] will revive the economy for the benefit of the people by removing chunks of regulations in each sector.”

For the past year, Choi, as former floor leader of the ruling Saenuri Party, mentioned economic policies 34 times on official occasions, including press conferences and leadership meetings.

Overall, remarks highlighting the importance of revitalizing the economy were made 20 times, accounting for 59 percent of the total.

Choi, who earned a doctorate in economics at the University of Wisconsin-Madison, is known as pro-growth. On April 1, in an address on the government’s three-year economic innovation plan at the National Assembly, Choi put a clear emphasis on growth.

“There needs to be more specific growth programs that encourage economic players to jump into the market more aggressively, but the measures should be precise,” he said.

On May 2, the nominee even called for a supplementary budget, expressing worries about dire consumer sentiment, especially in regional economies, after the sinking of the Sewol ferry.

The analysis also found Choi has been underscoring the importance of how the public feels about the economy.

Directly after his nomination on June 13, Choi told reporters that cold statistics about economic growth are not as important as how people feel about economic conditions.

He made a similar remark at a parliamentary address a year ago, saying, “The government should be able to propose strategies to revive the livelihoods of the working class rather than focusing on short-term indicators.”

As for the most recent economic team led by Deputy Prime Minister Hyun Oh-seok, Choi was a frequent critic.

“The current economic team is too complacent about the economic reality in which the jeonse (long-term rent deposit) market is collapsing and external conditions are adverse,” he said on July 9, 2013.

“Despite a completely changed economic environment, the economic team is still stuck in the past,” Choi said on Oct. 18.

In terms of real estate, Choi likened the current loan-to-value and debt-to-income restrictions on mortgages to “putting on a summer shirt in the winter,” implying he would make changes to stimulate the property market.

“Real estate is the most urgent and important task related to the livelihoods of the people,” the nominee said in August at a meeting with realtors.

“The restrictions that were imposed when housing prices soared due to speculation must be removed,” he added.

In early April, Choi even proposed adjusting the LTV and DTI ratios for particular regions and age groups.

The nominee supports the Park Geun-hye administration’s economic democratization campaign, a buzzword from her presidential campaign, but pointed out that the pace should not be too fast.

“It should be democratization that restores the economy,” Choi said. “Blind pursuit of the initiative will not help.”

Economic democratization, a term that is in the Korean Constitution, is often used as an excuse to crack down on the chaebol, supposedly on behalf of smaller companies.

Choi, who is a former government official, also supports the government’s push to reform the public sector.

“Choi will unveil his vision for the economy at his confirmation hearing,” said an official at the Ministry of Strategy and Finance.

The Blue House sent requests for confirmation hearings to the National Assembly on Tuesday. By law, the hearings will be held within 20 days.