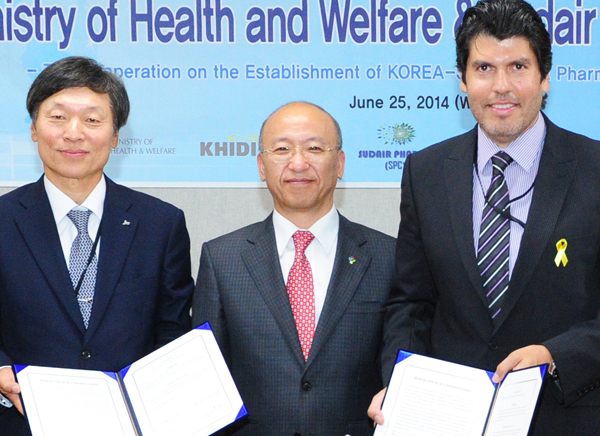 JW Group, the owner of one of the country’s leading pharmaceutical companies, said yesterday that it signed a memorandum of understanding (MoU) with a drug company in Saudi Arabia to build a plant that makes intravenous solutions, a treatment in which doctors inject fluids into patients’ veins.

According to the group, its affiliate JW Holdings signed an MoU with Sudair Pharmaceutical Co. at the Ministry of Health and Welfare office in Sejong City. Minister Moon Hyung-pyo also attended the signing ceremony. Sudair is a pharmaceutical company that was set up with investment from the government to create a pharmaceutical industrial complex in the Sudair region in Saudi Arabia.

According to industry sources, hospitals in Saudi Arabia use about 50 million bags of general intravenous solutions every year and most of them are imported from multinational pharmaceutical companies like Fresenius Kabi and Baxter.

Meanwhile, JW Holdings plans to sign an actual deal for the project with SPC this year to build the plant and to transfer related technology to the pharmaceutical company.

The deal is expected to be sealed on a turn-key basis in which JW Holdings will receive a certain percentage of the market price of production in royalties for 10 years.

“The MoU has shown our global competitiveness in the IV solution sector, from building a plant to manufacturing complete products,” said Park Gu-sir, chief executive and president of JW Holdings. “We plan to aggressively focus on the global market based on the quality products and technology we have.”