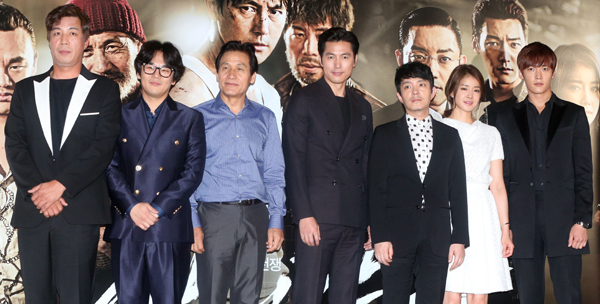 At a press conference held on Tuesday, the film’s actors and director Jo Bum-goo talked about the upcoming release in which Jung (center) plays a game of baduk with every foe he encounters on his quest for vengeance. Provided by Show Box

Following in the stead of “No Tears for the Dead” and “High Heel” comes “The Divine Move,” the third Korean action blockbuster of the year.

While its two predecessors are centered on the lives of assassins and the brutal world of professional killing, “The Divine Move” stands alone in that it is based on an unlikely subject matter: baduk, or the game Go.

But the matches are never friendly, and blood is spilled over every move.

At a press conference held Tuesday, the film’s seven main actors and director Jo Bum-goo talked about the movie that promises to deliver on both the action and intellectual front.

Fusing the intricate game that is often associated with brainpower, Jo admitted that his project was an ambitious one.

“There’s the baduk theme, but first and foremost it’s an action film, then there are all these significant characters. To get all these things in harmony was crucial.”

In a plot that weaves itself around the traditional game, Jung Woo-sung plays Tae-suk, a former professional baduk player who was framed for his brother’s murder.

Once he does his time in prison, Tae-suk is out to get gangster Sal-su (Lee Beom-soo), who operates an illegal gambling facility and is also responsible for Tae-suk’s brother’s demise.

But to get to Sal-su, Tae-suk must play a game against each of the lesser pawns that work under Sal-su while learning some invaluable lessons from the blind master of baduk, Ju-nim (Ahn Sung-ki).

“Those who aren’t familiar with baduk won’t understand some of the jargon,” said Jo on why he thought a baduk-themed action film was so long in the making.

“I met with professional players, and they coached the actors, too,” said Jo. “In the end, each character had a game plan that was their own, that would amuse even those who don’t fully get the game. 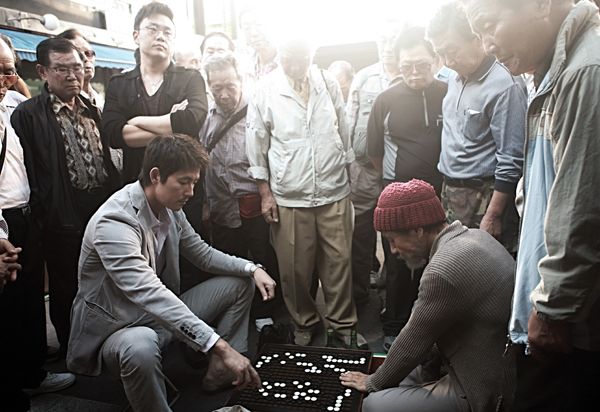 “With the characters explaining every move through their gestures and emotions, we tried to make it easier for the average viewer to follow.”

For the most part, the game scenes don’t last long and are usually cut short by knives flying and fists cracking.

The over-the-top action sequences - complete with the use of baduk stones as weapons - had Jung initially wondering if the work was based on a novel or a webtoon.

“To get the best action shots I think it’s best to give it all without worrying whether you are going to hurt yourself or not,” said Jung regarding the action sequences that seem perpetually in his character’s favor.

Also in on the drama with Jung - although of a slightly different kind - sole female lead Lee Si-young said that kissing the star wasn’t all that difficult.

“He kissed like a pro, as if he’d done it many times before. The scene went by in a flash,” said Lee Si-young, confessing that the sauna scene involving Lee Bum-soo was more nerve-wracking for her than smooching with the heartthrob.

“I thought he’d be wearing something, but I couldn’t be sure so I just looked at the floor. That was definitely a scene that got my heart racing.”

Eldest cast member Ahn Sung-ki, who plays the blind guru Ju-nim, said that taking on an unlikely character had more charm than he first assumed it would.

“I was worried, but I learnt that by playing a blind character you are able to concentrate better and really get into the emotions,” said Ahn, who spent time between takes playing baduk against co-star Ahn Gil-kang and practicing on a board custom-made for the blind at home.

With the film done and polished and soon to open to the public, Jo said that his “divine move” was meeting Jung.

“It was the best thing to have happened to me was, and through him I got to meet Ahn Sung-ki and got him on board too,” said Jo.

And while Jung will no doubt face comparison with his peers Cha Seung-won and Jang Dong-gun in their latest films, Jung said he doesn’t dwell on these things.

“It’s been a year since “Cold Eyes,” said Jung, “and rather than worrying about the competition, I think I’m more concerned about the quality of the film. I’m sure we will reap the benefits of the hard toil that went behind the work.”