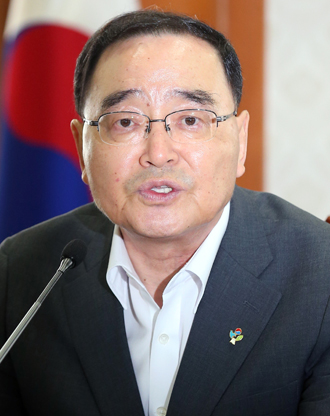 Prime Minister Chung Hong-won, who tendered his resignation nearly two months ago to take responsibility for the Sewol ferry disaster, will stay in his post after President Park Geun-hye yesterday rejected the resignation she earlier endorsed.

The reversal of a previous decision to jettison the prime minister - unprecedented in the history of the Republic of Korea - came after the president failed to find a replacement. Two hand-picked nominees withdrew after getting bad press about their pasts.

The president cited an overly long vacuum in state affairs as the reason for her volte-face.

“When there are urgent state affairs-related tasks piled up, the vacuum and division in public opinion have reached a critical point due to various problems that were uncovered over the course of [preparing prime ministerial nominees for] confirmation hearing,” said Yoon Doo-hyun, senior presidential secretary for public affairs, in a press briefing.

Chung, a former prosecutor who took office at the launch of the Park administration in February 2013, is getting a second chance because the presidential office can’t find a qualified third candidate for the job.

Park initially nominated former Supreme Court Justice Ahn Dae-hee on May 22, nearly a month after Chung’s resignation, but he walked away from the job after the media and opposition politicians accused him of making 1.6 billion won ($1.5 million) in just five months of practicing law after retiring from the Supreme Court in July 2012.

Former journalist Moon Chang-keuk was nominated on June 10, but he gave up on Tuesday after the media and opposition politicians labeled him pro-Japanese for comments he made in a 2011 speech at his church regarding Korean history.

Neither Ahn nor Moon even made it to a confirmation hearing, a step that follows presidential nomination, largely because the main opposition party New Politics Alliance for Democracy objected to their nominations.

“What kind of person is without a flaw?” said an official with the Blue House. “Even Jesus would be found faulty once he became a prime minister candidate.”

At the press conference announcing Chung’s remaining in office, Yoon said the Blue House would establish a new secretarial office devoted to finding candidates for high-ranking government offices and assessing their qualifications.

The same office was formed under the Roh Moo-hyun administration but was abolished by his successor Lee Myung-bak.

The addition of the new office will bring up the number of presidential secretarial offices to 10.

Some politicians whispered that the new office is a way of curbing criticism of Presidential Chief of Staff Kim Ki-choon, a loyal aide to President Park and the person in charge of personnel affairs at the Blue House. He is blamed for the failure to find a new prime minister.

“It is such a shame that the president avoids her responsibility by not reproaching Kim Ki-choon,” said Yoo Ki-hong, a spokesman with the NPAD.

Although the president endorsed Chung’s departure as soon as he offered to quit on April 27, he has continued to carry out his duties in the absence of a successor. But his power and influence have inevitably waned. Now questions have arisen as to whether his influence can be rekindled.

Chung told reporters yesterday that he would do his best “to spearhead the drive to revamp the national system.”

Whereas the ruling Saenuri defended Park’s decision to keep Chung in his post, the NPAD lambasted it.

“Was the promise the president made to renew the Republic of Korea following the Sewol accident a lie? Were the tears she shed earlier [during a press conference to apologize for the disaster] crocodile tears? This administration is incompetent, lethargic and irresponsible.”

Since the sinking of the Sewol, which left nearly 300 killed or missing, Park has promised to root out the bureaucratic mafia, or gwanfia, a term coined by the public who are disgusted with the kind of rampant corruption that may have caused the disaster. The word is a portmanteau of the Korean word for officials, gwalyo, and mafia.

The president unveiled a blueprint for restructuring the government while apologizing for the government’s poor handling of the disaster in an address to the nation on May 19. She also vowed at the time to partly devolve her own power, which some critics have called excessive, to a new prime minister, given that prime ministers in Korea have little power but are forced to step down whenever a national scandal or disaster occurs to assume government responsibility.