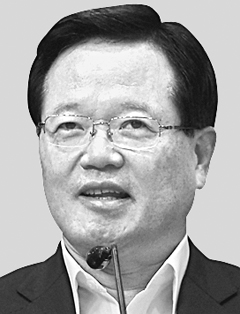 Among lawmakers in the National Assembly, Speaker Chung Ui-hwa has long been considered a strong proponent for bipartisanship thanks to his willingness to reach across the aisle to bring about political consensus. Such a quality is especially valued in Korean politics, which has long been filled with partisan strife. It was only a few years ago that physical brawls, including yelling and verbal insults, were seen as business as usual.

Since his election to the Assembly’s highest position in May, beating out former Saenuri Chairman Hwang Woo-yeah in a landslide victory, Chung, a former neurosurgeon from Busan, has kept up that integrity.

“All the lawmakers here are keenly aware that the key to future success for the country is to work in harmony and cooperation. And yet, they are not doing any of that,” the five-term lawmaker said during an interview with the JoongAng Ilbo on Wednesday in his National Assembly office.

“As an assembly speaker, I will strive to overcome obstacles that stand in the way of achieving bipartisan cooperation.”

Chung ran in the election for National Assembly speaker two years ago, facing off against former Speaker Kang Chang-hee, a former military man who is part of the pro-Park Geun-hye faction within the ruling party. However, that time he fell short.

Chung’s lopsided victory in his renewed bid for the position left many within the ruling party questioning whether it was representative of growing discontent among Saenuri lawmakers over what it perceives is the Blue House’s unilateral way of carrying out policy directives, with the presidential office often neglecting to seek cooperation from them.

Having served as speaker for just over a month, Chung has already received high praise from the main opposition New Politics Alliance for Democracy (NPAD), which said in a statement issued Wednesday that Chung’s recent performance as speaker was a display of “outstanding leadership that seeks bipartisan unity.”

In the Korean political circle, which is usually rife with discord and wrangling, such acclaim directed at a ruling party member from the main opposition is especially rare.

When asked about Moon Chang-keuk, the former prime minister-designate who backed out of his nomination before his confirmation hearing after controversy over remarks he made on Korea’s modern history, the speaker said that the former journalist should have been given an opportunity to explain himself and clarify any misunderstandings before lawmakers.

Touching on mounting criticism that confirmation hearings are mainly used by lawmakers to pry into nominees’ private lives in an attempt to humiliate them, the 66-year-old speaker said it was time to consider introducing a confirmation hearing consisting of two tracks.

“Once the Blue House designates someone for a cabinet position, all public attention is then drawn to the nominee’s personal affairs, not his or her professional qualifications for fulfilling the tasks at hand,” Chung said.

“And everyone is digging into the records of the nominees’ relatives in concerted efforts to find any signs of irregularity. Under these circumstances, who would step forward and say they will serve the country?”

He continued that if lawmakers and those in the media cannot amend the current confirmation process, Korea would not overcome its deeply rooted “ideological division.”

“We need to have a confirmation hearing that examines one’s expertise in public, while lawmakers question nominees’ personal issues behind closed doors.”

Q. You proposed holding inter-Korean parliamentary conferences that will invite lawmakers from Seoul and Pyongyang.

A. Unification is an issue that requires the utmost attention and the National Assembly should lead the way [in improving inter-Korean relations] rather than just waiting for the Blue House’s guidance on the issue. Despite President Park Geun-hye’s Dresden Declaration in March [on unification], inter-Korean relations have somewhat cooled down largely because of [Pyongyang’s] misinterpretation [of her proposal]. The North Korean initiative also lost its way in the wake of the sinking of the Sewol ferry. [By proposing inter-parliamentary talks], I am now striving to find a role for the National Assembly in helping the Seoul-Pyongyang relations. I wish to realize the bilateral conference during my [two-year] term.

You said you will establish a direct hot line with President Park.

Presidential Chief of Staff Kim Ki-choon called me on the phone to give me the number. He said President Park asked him to do it.

How do you intend to use it?

The future of our nation hinges on the next two to three years, especially considering North Korea’s nuclear weapons development. But the president is in a very difficult position, and she has mostly refrained from going out to see people on the streets because of the security issue. Merely reading reports by her subordinates [on the public’s livelihood] will not do the job. I intend to use the hot line when I feel she needs to have a direct talk with a person from outside the Blue House to have a direct sense of people’s lives. I will work with her [for the next two years] that at the end of her presidential term, she will feel it was in the best interest for her presidency to have me as speaker.